Mapping the Presence of Rome’s Pasts: from Piranesi to Freud and Back

As much as trace spatial relations, maps of the buildings of Rome are powerful sites of memory that most urban maps of place balance qualitative content with schematic design. They offer their viewers amateur archeological searches of identification, and even spatial excavation of the layers of how space was occupied in the city, each map including echoes of the past habitation of the city’s physical plant, as if in a game of memory or amateur archeology, staking out both how a monumental urban space was built and how it revised the historical space on which it was configured.

Despite the prominence of the ancient plan of the city in its Republican and Imperial identity, efforts to create a persuasive record of ordered space in maps amp up their cognitive work, as it were, to organize the multiple temporal layers of the city’s occupation of built space–from the walls that once contained urban areas to changing footprints of the city over time.   Indeed, the chorographic image of Rome was a map not only of community, but temporalities; negotiating temporalities was a rite of passage for visitors to Rome. And it is in many senses not surprising that as Freud was searching for a new metaphor to express his theory of the mind, increasingly uncomfortable with rooting psychic processes entirely specific material processes, by locating memory in a neural network capable of storing the impact of external stimuli, he turned to the mapping of sedimented historical pasts in Rome to describe the mind’s organization and map memories.

In a sense, rather than retain the model of the conservation of neural energy to describe memory, he sought a common touchstone of organizing the past’s temporal succession in how maps offered an objective means to encode and organize multiple pasts, which echo the objective record of synchronous coexistence of multiple pasts that existed in archeological maps of Rome, which clarified past physical plants of Rome for their readers in ways that magically gave material existence to imagined buildings in the modern landscape. 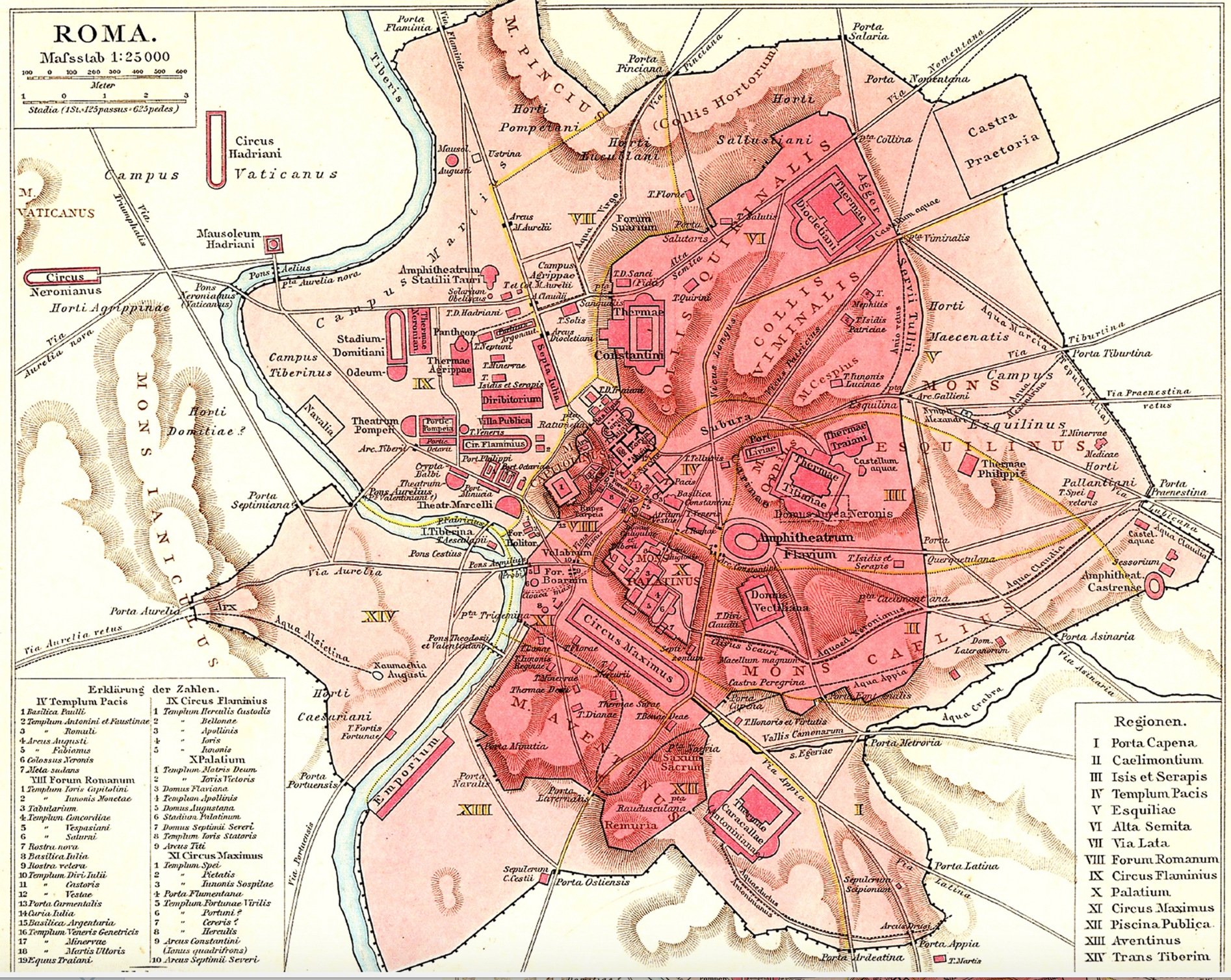 The powerful clarification of coexistent ancient structures in the layered city that Freud frequently visited provided a powerful means for navigating the past, which could be analytically and empirically experienced, and indeed represented with a fitting objectivity:  in the map, one might say, the past becomes a coherent territory.

The encompassing of such a burgeoning spectrum of spatial inhabitation is both the promise and daunting topic of maps of Rome from the Renaissance, and from the mid-eighteenth century–a proliferation of maps whose increasingly plastic design expanded the cognitive work maps did as tools to refine viewers’ relation to its pasts, in ways that reflected the mechanical possibilities to create a material record to the past.

4.  The spatial organization of Rome was itself a map of temporality. As much as survey the forms of mapping Rome, this post is concrete in the particular pleasure of such maps of place to orient views to the city’s situation in both time and space, and the unique work maps did.  Maps of Rome are striking in their acts of balancing qualitative views of place and immersing viewers in the past fabric of the city–inviting viewers to admire the commemoration of spaces in the ancient urban polis and seat of empire and the structures built over it by Popes and government.

Famously, the humanist Leon Battista Alberti mapped Rome’s ancient buildings as if to celebrate his recovery of its ancient past for highly literate readers of the Renaissance.  As an early archeologist who measured the buildings that were sunk underground in the city, Alberti sought to transpose ancient buildings on a radial grid about 1450 as if to locate them more concretely in a symbolic game of imaginary excavation of the city’s monumental buildings in which readers of his map could partake, enjoying in the recovery of the past in what seems a typical Renaissance pursuit of creating knowledge form the past.  To do so, Alberti adopted surveying techniques to experimented with ways to orient viewers to the past city of ancient Rome, physically present but lost to immediate memory, yet able to be recreated in a map and to be given presence ty doing so.  His diagrammatic tools for transcribing the disposition of monuments served to persuade readers of the past city’s physical plant capture this spatial dialectic of making present from ruined remains, and inaugurated a particularly rich but also almost compulsive tradition of mapping emerged among cartographers from the Renaissance.  Working in paper and ink and engravings, and later in paint, artists and mapmakers compulsively returned to the peculiar problem of fashioning presence and representing relations of space and time–often by mapping the relation between the two, as if to clarify the presence of the accumulated past by sorting out spatial relations in scaled plans.