Moving through Rome’s Pasts: from Piranesi to Freud and Back

15.  As an architect, Giovanni Battista Piranesi suggestively arranged surviving fragments as fragmentary shards in post-modern manner in his eighteenth century map of Rome of 1762, less as evanescent fragments of ancient Rome to which erudite archeologists returned to reconstruct its continuity, the Baedeker guide rehabilitated their iconography for the cultural memories of new readers, but acknowledged its effective stripping away of the built layers of the city by mapping is forms within the fragments of the map rediscovered gradually from 1561.

The reconstruction of cartographical fragments of the Severan plan that frame Piranesi’s 1761 map of Campo Marzio in his Roma offer an image of intentional melancholy.  They suggest the difficulty of assembling the ancient map of Rome, but remind the viewer of the temporal remove of the past in its dislocated fragments.

Piranesi may have known of Giambattista Vico’s recent 1741 Scienza nuova–but it may be suggested by Piranesi’s visits to Naples in years immediately following.  At any rate, Piranesi flanked Rome by material fragments of the Severan map of the ancient city as if to suggest the discovery of fragments of the ancient city brought to light if long concealed, in line with Vico’s metaphysics of the recovery of ancient meaning–as much as in a melancholy relation to the lost past:  assembled around the modern map of Rome, the marble fragments of the Severan map are less a fragmented record than offer evidence of a still earlier past, now surpassed, and an assertion of the unique made nature of the ancient city’s space:  the Severan plan emphasized the made nature of Rome’s monuments for Piranesi, perhaps echoing how Vico privileged the made nature of all human knowledge in the Scienza nuova–and the distinction Vico gave ancient Rome as a unique center for making knowledge.

The continuity of these fragments as engraved by Piranesi seems uncanny:  unlike in other cities, whose past is all too often rapidly obscured, the organization of the forma urbis has such a staying power in the city’s physical plant that most regions, if only fragmented, can be immediately recognized as a disposition of space that has been occupied in new ways: 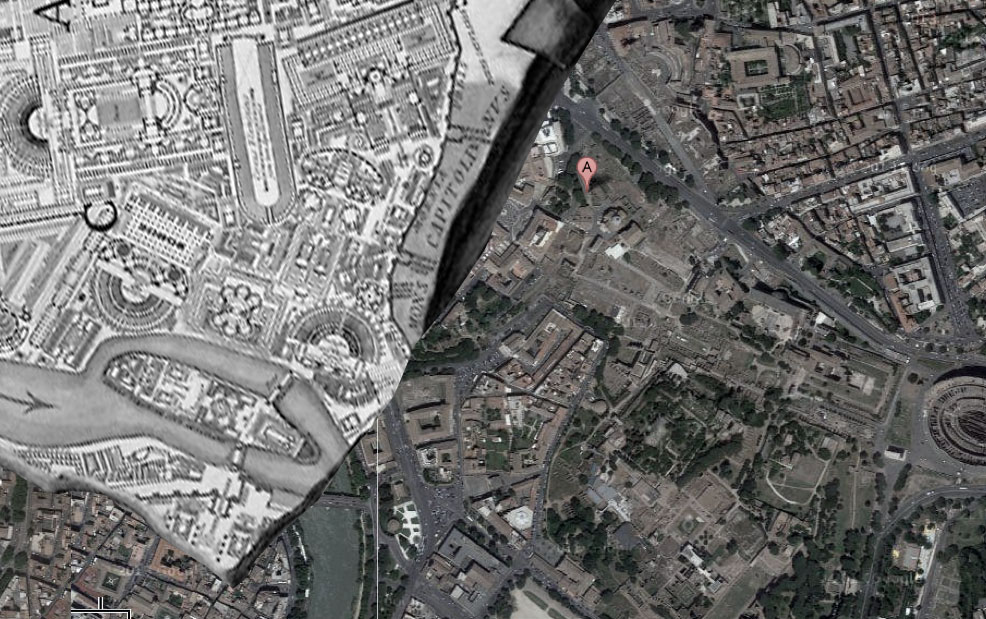 This image, on the edge of the Forum and broken just beyond the Capitoline Hill, maps the Isola Tiburtino against modern Rome.  Piranesi included such fragments of the Severan map about his map as if to provide a reflection on the made knowledge of all things cartographical–and an graphic embodiment of the emphasis placed by Vico on the made nature of built environments–reminds us of the suppression of the city’s ancient space. The extent to which such fragments of marble from a once entire map exhibited for public view describe a loss of the harmonious expression of the built city responded to Giambattista Nolli’s recent comprehensive cityscape for Benedict XIV by surveying tools of his own device.

The unearthed fragments of the Severan plan provided an eloquent foil for Piranesi’s project of mapping its lived space.