The False Imperative of the Border Wall

27.  Since his campaign, Trump has repeatedly directed the nation’s attention with an almost obsessive return to the southwestern border. It is as if he relies upon the border as a basis to remind the nation of why he was elected, or as if he were seeking to compensate for a lack of orientation to what deep problems of global scale and proportion. Instead, he relishes magnifying the southern border of the United States to provide a narrative that made sense, or some sense, of everything, and as a conceit he knows he has persuaded the nation to dedicate its attention.  It is a moment in which he can wallow in the spotlight, and bask in popularity. Trump’s famous performative public shaming of Nielsen at a cabinet meeting seemed to summon an aggrieved anger toward immigrants to whom he directed blamed for downward social mobility and dashed dreams for the benefit of his constituents, seeking to direct the discussion to some target as if desperately searching for a place to pin the blame for the promised wall’s irritating absence:  Secretary Neilsen was but the latest target for expressing unfounded public rage at the absence of the border barrier he had promised to impose on the map by a sheer act of will, and accepted the role.  Perhaps the attempt that the DHS Secretary made to encourage migrants to present themselves in a legal manner at border checkpoints was the problem; perhaps he just needed a credible scapegoat to continue the border show.

As if blaming Secretary Neilsen for his own lack of securing funding for the Border Wall–or even reaching a meaningful compromise with democratic legislators, as once had seemed possible when an agreement not to deport children brought to the United States as children was included in “a package of border security, excluding the wall,” before his intransigence on the construction of the border wall reared its head again–the fear of allowing undocumented immigrants into the nation that anti-immigrant groups has long drawn national attention, helped by FOX and others, online and not, seemed to be something for which he could not, as President, accept blame.  As Trump styled himself as an outsider politician became less viable in office, he blamed his staff and other members of the “deep state” for having prevented the new policies he proposed from being adopted as law–although they were deeply incompatible with U.S. immigration law.

Was Nielsen just not ready to sit at the big table with the big boys, and man up to building a wall that would be a barrier sufficiently tough to block women and children?  Would she construct a watered-down spongy version of the wall inflected in unmanly dirty pink,–as if it were less aggressive to migrants than his promise to close the borders by a “big, beautiful wall”? 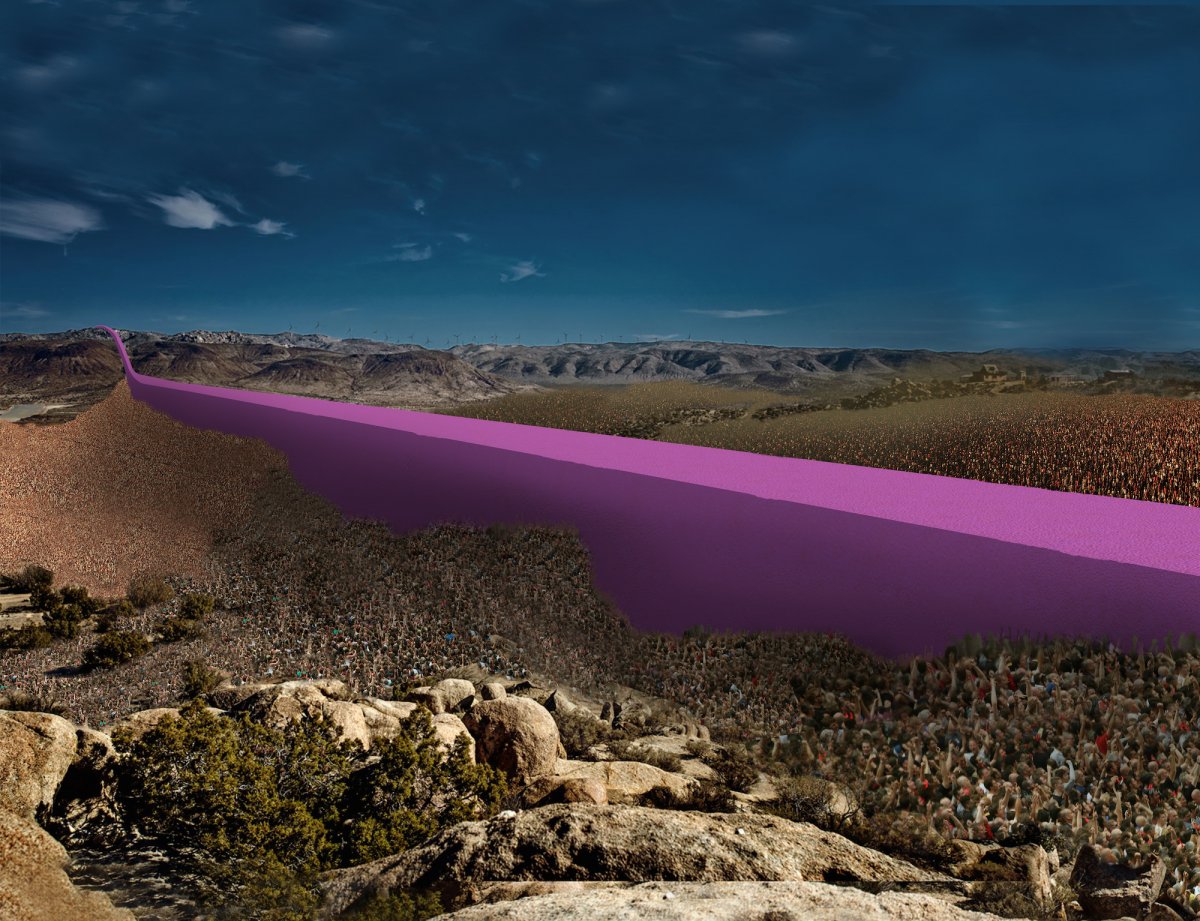 Whatever the reason, Trump’s wildly undisciplined railing against the only woman at the table embodied the aggrieved nation, afflicted by “the worst immigration laws in the history of mankind” filled with the “deadly immigration loopholes,” which invited “horrible killer gang members” into the country bearing the very “drugs pouring into our country and poisoning our youth”:  was his performative rhetoric get the better of him?  or was he extending the claims he had long made, to shock the nation into building the wall by the oldest of anti-immigrant tropes?  Infuriated by increasing arrests of immigrants at the border to  the highest levels since Trump became President, he  directed his rage at Homeland Security Secretary  Nielsen as if they were able to reverse the rise in a common metric for illegal immigration flows, even as he has sought to roll out the border wall.  After he had welcomed the statistics as a basis for promoting the border wall as an enhancement of national security efforts, the desire to make the promised border wall a site for the restoration of a “rule of law” is paradoxical, as despite its promise to disrupt gangs, cartels and smugglers, the border wall seems to produce opposite results–as Trump continues to affirm the need for its construction to protect the nation, even as he seems to change its character, but may be placed in the same quandary as George W. Bush and Barack Obama in bolstering U.S. Border Patrol agents monitoring the border since the record-high 1.6 million border arrests in 2000-the start of fears on border activity and terrorism.

But when the President who had offered the nation the possibility to build this unwieldily border wall as his central political vision decided to demand from  DHS Secretary Nielsen that she “close” the border, his own inability to control or encourage the progress of the wall or its effects became tragically clear.  One couldn’t but wonder, as Trump represented himself as aggrieved, lacking the wall, and himself performed a feeling of being wronged by a woman he’d charged to supervise the construction of an obstructive barrier.  The blaming Nielsen in the official meeting concealed the demand for the border wall that was advocated by the Federation for American Immigration Reform, but which increasingly looked like it might become, in Nielsen’s version, a feminized version of the wall he promised, as she had invited immigrants to arrive in established Points of Entry to petition for asylum in the Untied States, rather than undertaking dangerous overland travel.  At the same time as Breitbart had already readily sounded the alarm of a traitor in the midst–“DHS SEC KIRSTJEN NIELSEN MADE ‘COLOSSAL MISTAKE’ IN ‘INVITING’ FOREIGN NATIONALS ‘TO COME TO PORTS OF ENTRY’”–President Trump blamed her for not including ports of passage that would undermine the obstructive barrier he had campaigned to meet the anti-immigration rhetoric whose effects had become so enamored.

Trump seemed almost cognitively unable to imagine granting non-violent migrants entry to the United States.  Chief of Staff John Kelly sputtered about the danger of allowing “people that would easily assimilate into the United States into our modern society” given their  “overwhelmingly rural” origins, as if migrants could be excluded because of their social origins.  It is as Trump needed to sustain the”big, beautiful wall” in his public address, haunted by the idea of a “pink wall” Nielsen might create, to blame someone–a woman, even better!–for its failure to materialize as announced.  The dusty wall–whose public imagery would subvert its machismo–could not replace the wall that Trump promised the nation, as Guadalajara-based architects at Estudio 3.14 realized, which was so central in the religion of the nation that he sought to rally Americans behind–as if she were not man enough for the task of its construction.

Trump channeled a deep sense of the nation’s anger by yelling at his DHS Secretary, as if to suggest he could have fulfilled the project; the conceit seemed that if his secretaries performed as he’d so clearly desired, it would be complete.  The absence of the wall was precipitated by budget disputes, but revealed by the collective advance of a version of what seemed the very immigrant hordes that Trump had long envisioned, and the question it raised of what sort of border confrontation would result.  For Trump had searched for historical greatness in the power of the wall to redefine borders, searching for powerful modes of mapping to defend a religion of the nation– 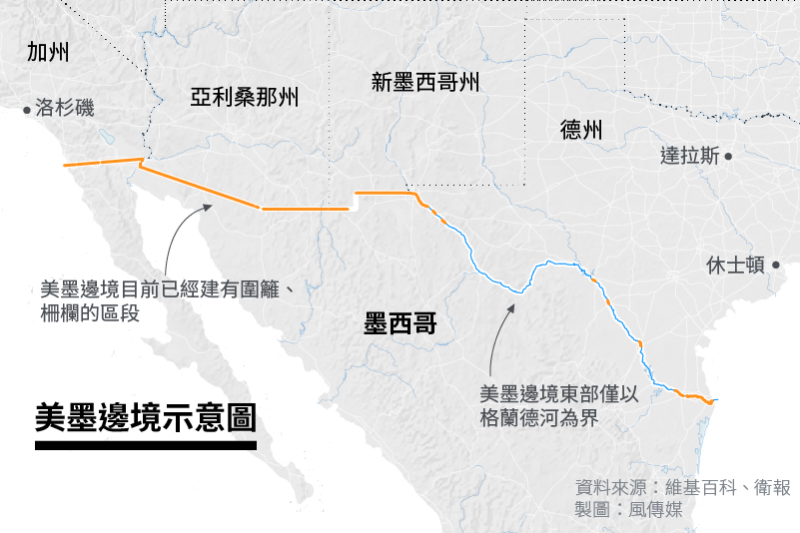 –in a megalomaniac construction that that might recall the great megalomaniac displays of power over nature in the great earthworks of the premodern past.

24.  In response to the Nielsen fiasco, one might turn to Christo’s recasting of the border wall as a flowing banner, the Running Fence, first built in Sonoma and Marin Counties in Northern California back in the bucolic days of 1972-6, in order to promote a quite different idea of the nation, as demanded in an online petition that attracted some thousands of supporters, in an attempt to help improve the public standing of the United States as a model of laws.

Ronald Rael’s studio more eloquently suggested a more site-specific nature for the wall, questioning less its legal upending of rights.   Revisioning the wall alternatively as a xylophone, a set of revolving burrito stands, or a see-saw, he restores the border to a site of sociability and innocence it long was, in an architectural manifesto revising the divide that seemed to be the inevitable outcome of Trump’s electoral victory.  Rael observed on the day after the 2016 Presidential election, even if Trump “has not yet built his ‘great wall’ literally, he certainly has done so figuratively . . . . within our body politic.”

By promoting the idea of border security in ways especially corrosive of the nation-state and of communities, Trump had framed the building of a border wall as a debate along party lines and a basis to disenfranchise unauthorized immigrants, increase the need for border agents and Immigrations and Customs Enforcement across the nation.  Long before the election, the figurative power of the wall dramatically increases the steep sense of vulnerability all of immigrant.  Rael;’s Manifesto created several alternative architectures of the wall on the eve of the Presidential election, however, recognizing the shared nature of the frontier as a site of mutual habitation– to underscore its remove from the plans that Donald Trump and friends imagine, begining from the fact that the border runs so clearly through settled space–rather than across uninhabited lands–where the prospect of materializing a permanent divide obscures the relation of the wall to humans who cross the border annually, and returning it to the state of a cultural bridge–alive less as a threat than a site of mutual collaboration in a new mapping of the border–a mapping that Rael disguised cleverly as written atop an signatories to an official-looking “Boundary between the United States and Mexico,” as if the true accord between both countries, agreed by signatories on both sides of the proposed.  On this wall, children use a teeter-totter with arms joyously raised–as a counter-map of the imposing wall Trump had described to the nation. 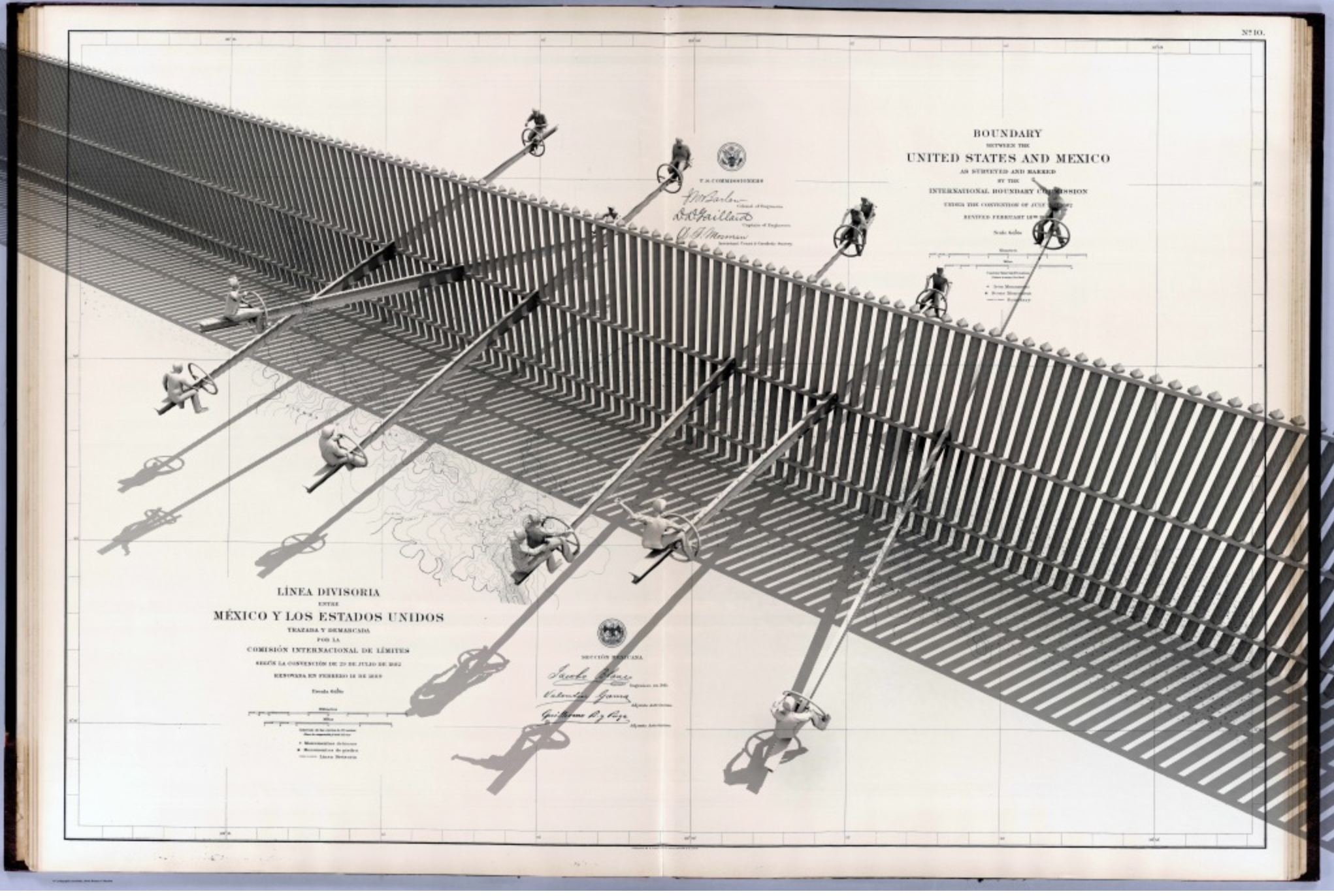