If Santa Claus is global, the image of Santa living in the North Pole outside of sovereign divides has been elevated to a new horizon of expectations in the age of real-time maps. The question of “Where is Santa?” now can be responded to on a real-time viewer, prepared each and every Christmas Eve for over fifty-fie years, the North American Aerospace Command. For since the Cold War, and through the present age of smart phones and real-time tracking, NORADh as invited viewers all over the world the chance to track the gift-laden sleigh of Santa crossing the night-time sky at the speed of starlight. Never mind the different hours and expectations of Santa Claus in different nations or countries. For NORAD allows the world to track the flight of Claus cum reindeers on NORAD’s Santa Tracker, an annual collective exercise in mapping of increasing popularity, moving the image of bearing gifts into the globalized world.

Indeed, the mind-boggling proportions of its popularity, attracting upwards of 20 million individual users in 2011 alone, is a statement not only to its improved UX, but to the versatility of its incorporation of mapping servers better to imagine the itinerary of Santa’s airborne sleigh.  For while we once envisioned the night-time flight of Santa Claus far-off and against a starlit sky and full moon, to accentuate the surprise of a magical sled-borne itinerary–

–the Santa Map brings that journey up-close for everyone before a computer monitor, following a sort of sleigh space that is the surrogate for airspace.  The remapping of Santa’s itinerary has been done in a way that tracked, as the sleigh’s global progress is intercepted and relayed online in real time from posts of remote observation to viewers around the world.  And in an age of global surveillance, there seems to be no reason why Santa’s sleigh cannot as well be surveilled for the interests of children everywhere.

There’s a huge appeal in the ways that the Santa Map creates and imagined community, as much as it embodies an annual itinerary.  The interest in tracking Santa’s sleigh has grown considerably in recent Christmas Eves.  The huge interest in tracking Santa’s sleigh–and effectively mapping the visits of the airborne sleigh into our hearth–is a way of bringing maps in line with pleasure at a time when we need to look for solace where we can find it, and where we can find a comfort that the onslaught of most maps of contemporary events in fact rarely provide.

Christmas has been a communal but solitary experience–located in the hearth and around the tree, and gift-opening a ritual of individual families–but somewhat serendipitously, the collective witnessing of the Santa Map offers a vicariously removed experience for crowds of viewers, removed from one another but creating the illusion of comprehensively witnessing the arrival of a fictional character to homes everywhere, as if to knit us together in holiday wonder, suspended for the evening in an imaginary international airspace of momentary world peace.  In recent years, but perhaps since the Cold War, this particular image of good cheer provides the odd inversion of the danger of the military missile strikes, if not offering the miracle of suspending fears of missile strikes, or the contradictions implicit in imagining peace in a world that lies on the brink of global war by using the very tools to chart missile defense systems as instruments of good cheer. Santa may face a different workweek in the malls where he can now be met in many different nations–as he traverses national borders with different work weeks!–

–but the folks in the U.S. government and NORAD it completely reasonable to have the right to track the geospatial complexity of Santa’s sleigh ride, without removing any mystery out of Christmas holidays. It may be even reassuring that if Christmas Eve is Santa’s busiest hour of flight, the arcs of where reindeers guide his flightpath can be illuminated on our devices, in vivid geospatial specificity and even local detail.

The tortured narrative of the recent American election ended with something of a surprise.  As we struggle to map their results, it is impossible to deny that they may mark entrance into a new world which may antiquate earlier forms and points of geopolitical reference, as global politics seem to be about to be destabilized in ways we have never seen.  For in ways that reconfigure geopolitics which transcend national bounds, the extent of destabilization seems to abandon the very criteria by which we have been most familiar to map national borders, and indeed  international relationships, as we enter into a new era of resistance, suspicion, and fear that dispense with international conventions that seemed established in the recent past–and internationalism rebuffed and international obligations and accords dissolved.  Or at least, this was one of the few promises made by Donald Trump that appealed to voters that seems as if it will be acted upon.

The very America First doctrine that catapulted Trump to the White House stands, for all its championing of national self-interest, to be best embodied by the removal of the United States from its role on the global geopolitical map.  And the removal of the United States and England–achieved through the striking success of go-it-alone political parties in both nations–seems to show just how outdated a five-color map is to describe the world.

The vintage Rand McNally map that claims to provide a world picture assigns prominence to the United States–and Great Britain–becomes the perfect foil and field to illustrate the impending uncertainty of a move against globalization across the western world.

For the prestige of the globe as an image for the dynamics of global politics was long familiar as a part of the furniture of the Oval Office, as the stunning fifty inch diameter mounted globe that OSS director William J. Donovan had specially constructed for President Roosevelt, at the suggestion of General George C. Marshall.  A stunning pair of monumental mounted globes were presented President Roosevelt and Prime Minister Winston Churchill by the U.S. Army as Christmas Gifts in December, 1941, which set on large bases on which they rotated for easy consultation.  The globe embodied the newly emergent geopolitical order that folks as Donovan created and served, and which the OSS Map Division protected.  Could we imagine Donald Trump gazing with as much interest or cool at a revolving globe?  While Roosevelt stares with remove but interest at the globe, apparently focussing his eyes near the Straits of Gibraltar, this formerly classified Central Intelligence Agency photography was meant to celebrate his growing mastery over a theater of global war. 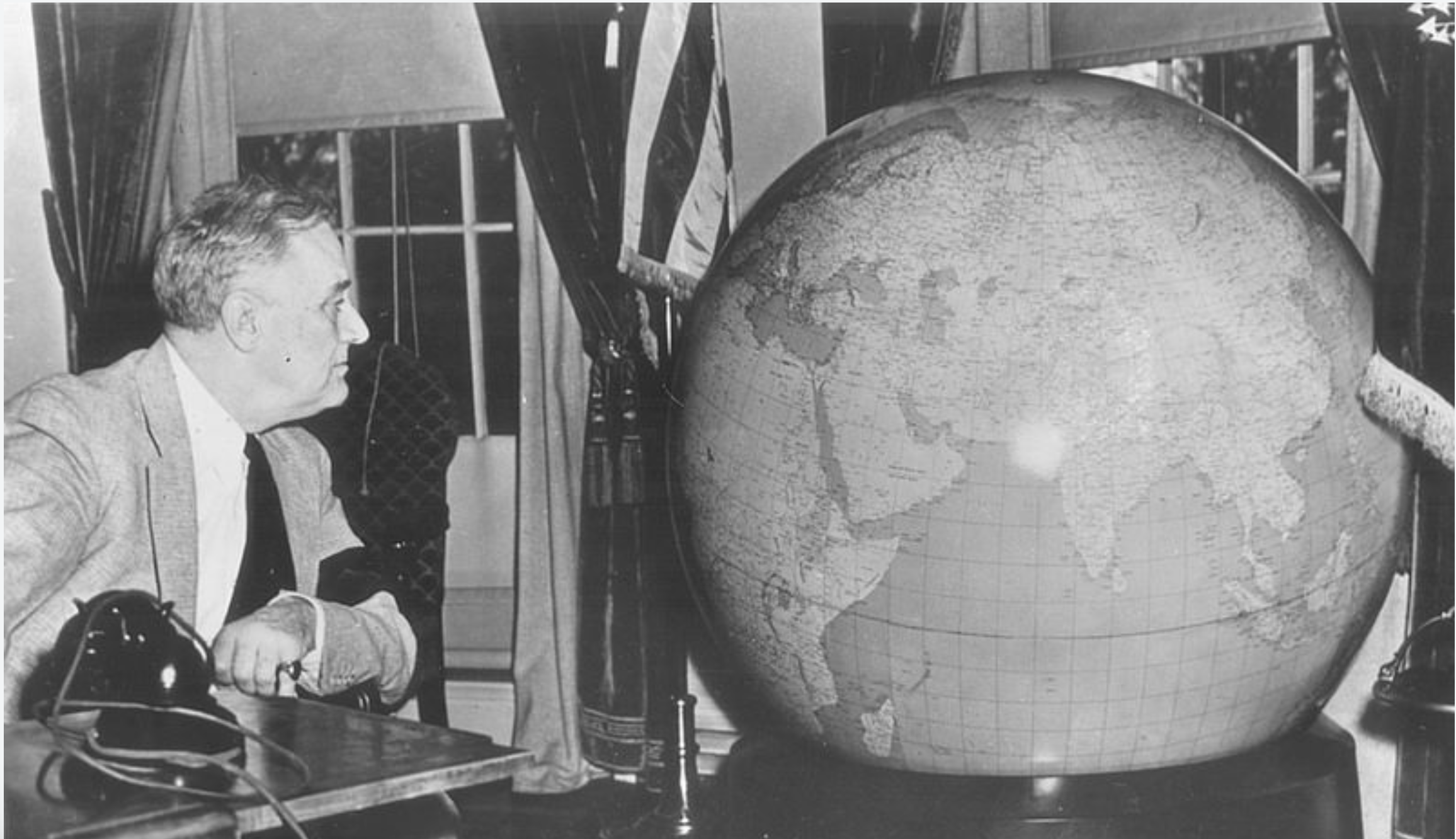 The monumental “President’s” globes Donovan presented on Christmas 1942 to both Franklin Delano Roosevelt and the British Prime Minister Winston Churchill placed monumental revolving globes–each weighing an unprecedented 740 pounds–occurred at the suggestion of Dwight Eisenhower, with the confidence of “that they foreshadow great victories,” in the words of George C. Marshall, and Roosevelt proudly told the General that he treasured the gift enough to place it directly behind his chair in the Oval Office and to marvel at the ease with which “I can swing around and measure distances to my great satisfaction;” Churchill’s was sent by airplane directly to 10 Downing Street.

The symbolic role of these large and weighty globes cannot be overstated:  the large globes symbolize the complete mastery of geopolitical knowledge by both commander in chiefs in the midst of World War II; they show the investment of military forces in maps.  The world map served in the post-war to embody the new global order already emerging during that war on which both understood a benevolent geopolitics destined to define American hegemony in the post-war; the Weber Costello globe company of Chicago, Illinois would construct some fifteen copies before going out of business in 1955.  With sixty years of hindsight after the globe-making company shuttered its production line of deluxe maps, it seems the new United States President has opted to withdraw attention from maps.