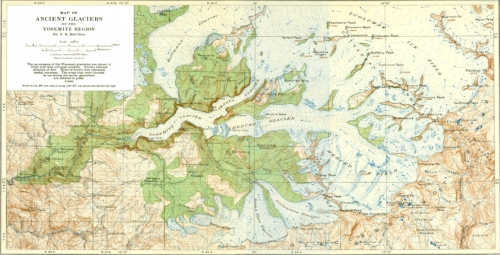 François Emile Matthes’ stunning survey of the ancient glaciers of Yosemite were his first geological investigation.  They built in a stunning manner on questions raised about the origins of the Valley’s unique form in repeated surveys of the Valley’s unique and striking topography, and renewed attention to the role of glaciers, winds, and water in its formation.  From the USGS survey of organized by George Montague Wheeler, whose large-scale topographic map of the region immediately preceded the geodetic survey begun in July and August of 1890, to link the region to the transcontinental surveys by means of astronomical observations, and the stunning progress refining maps of the back country Sierras since the 1880s.  Wheeler’s men in fact mounted a twenty-inch theodolite on a concrete pier atop Mount Conness, dragging it up by horseback and donkeys, to be housed in a small observatory tethered on a rocky peak by sixteen separate twisted wire cables.  The subsequent Sierra Club map of the Yosemite and Hetch Hetchy valleys in the 1890s by U.S. Army officers and finished in 1909, just after Matthes began work, used short seasons to map the Valley as best they could–R. B. Marshall and H.E.L. Fussier surveying both the Yosemite Sheet, Dardanelles, and Mt. Lyell sheets, and two colleagues the Bridgeport Triangle–but faced multiple obstacles to coordinate a completed survey in this hitherto hidden region of the Sierras.

Matthes’ deep appreciation of cartography not only as a survey of the land, but as “an interpretative and synthetic art,” as he often sustained, that depended on “intelligent insight into the nature of land forms” as much as the accuracy of delineation suggests how Matthes realized good mapping was an interpretation based on the successful wielding of the line as a tool of reflecting actively on excavating a deep understanding of a terrain.  Unlike a topographic relief map, Matthes’ map of the valley’s ancient glaciers charted the progress of glaciers that defined the Valley by arrows that suggest their ancient progress and movement, viewable in the above map from the National Park Services, delineating how the movements of the Hoffman, Merced, Tenaya, and Yosemite ice glaciers shaped the valley’s waterfalls and mountains. 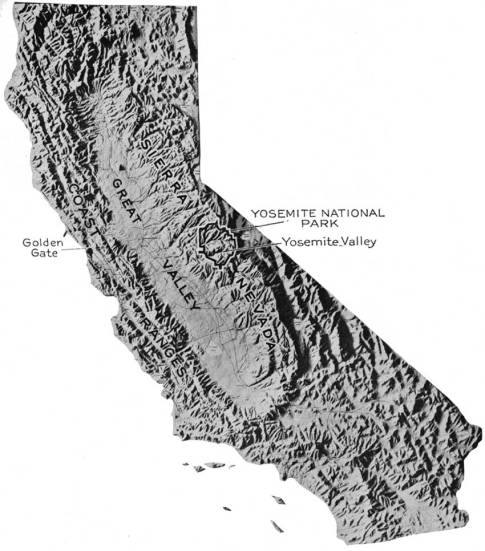 Matthes delineated the region’s complex geomorphology with an eye trained to synthesize observations of how glacial progress sculpted and shaped the land, as much as craft a scientific image that asserted authority in a rhetoric of objectivity.  The historical depth of Matthes’ work sustained his attention to the Valley floor as a geomorphological investigation, distinguishing it from any map ever made since of that part of the Sierras.   Matthes’ map uses new surveying techniques of registering elevations, which he studied at MIT, and had wanted to perfect it by shading.  Matthes’ learned cartography approached surveying from a distinctly academic perspective to pose new questions about the terrain, as much as map its trails, hidden lakes, and shifting topography of a region that was then over half the year under snow, displaying the drama of the landscape in a cartographical form, that recall his own intensive observation of mountainous Alpine topography in Switzerland and nourished in America by studies of his beloved White Mountains and the Grand Canyon. 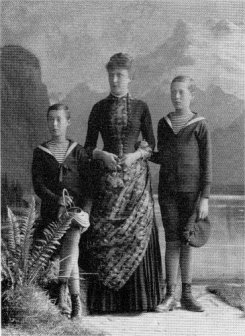 From the age of eight, François and his twin brother George contracted malaria in their canal-side residence in Amsterdam, where their father had directed “Natura Artis Magister,” Amsterdam’s zoological gardens.  They belonged to a merchant family that furnished rubber for the first transatlantic cable.  Just before their tenth birthday, the family doctor prescribed a multi-year stay in the Alps for the twins in the Alps, far from malarial flies, that gave him both a visual interest in alpine topography and a close familiarity with map-use:  when they lived on a mountain overlooking Lake Geneva in 1885-6, in summer months, they joined their father to climb mountains using “cloth-mounted military maps (General Dufour’s series) which showed all triangulation stations” that his father brought from Amsterdam, which lacked any contours but he remembered as “beautifully finished with hatchures, which brought out the relief in great detail” much in the manner that Matthes would later aspire.

His early exposure to maps was somewhat legendary, and perhaps mythologized.  Their father taught him and his twin how to read these maps, leaving them to wander with the maps “without fear of getting lost,” Matthes remembered, and the family regularly returned to the Alps, visiting Chammonix to scale Mont Blanc and its glacial formations for summer expeditions.  Both studied technical drawing from an early age, admiring Frederick Remington’s art and other images of nature, and after studying technical drafting in a German Ober-realschule in Frankfurt am Main, travelled to America with their family where François studied at MIT, as well as being active in the Agassiz Association at Boston’s Museum of Natural History, influenced by a professor to work with the US Coast and Geodetic Survey, and in 1895 he started surveying in Rutland, Vermont, Indian territories, and the Grand Canyon, pioneering a telescopic alidade to sketch form lines and contours lines that effected alpine glaciation.  Matthes’ survey of 500 square miles of the upper Grand Canyon provided a basis for “perfecting the extreme test of the efficiency of that instrument,” and he petitioned to construct the map the unheard of scale of USGS,1:48,000, with 50-foot contour intervals, following his own field map, to reveal its complexity.

And so he arrived in the Yosemite Valley, where he would devote two seasons of fieldwork. He interrupted the survey begun in 1902 to travel to the Yosemite Valley the following June, impressed with the “overwhelming” view from Inspiration Point in the Valley that he would later photograph: he returned after spending the winter in postgraduate studies in geomorphology at Harvard that informed the dense observations compiled in the map engraved in July 1907.

The scientific artifice of such unprecedented large-scale maps documented of nature as the Yosemite valley and Grand Canyon were first known, mediating a scientific record by which their nature was apprehended with wonder.

Matthes’ desire to chart the genesis of the Valley’s landforms led him not only to invest detailed attention in the 1906 map of Yosemite value, but to view its compilation as a study of glacial geomorphology, paired with loving black and white photographs.  “Natura Artis Magister”: before Carleton Watkin’s photographs of the Valley, or the later black and white images of Ansel Adams, or John Muir’s inspirational 1912 The Yosemite, Matthes’ scientific atlas of glacial paths constituted a model of the artifice of recording nature from which others would later depart. 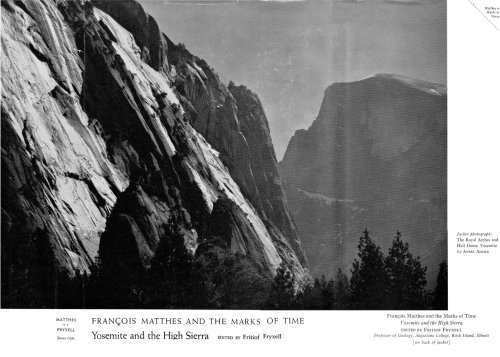 There are many narratives of the valley’s mapping.  Matthes’ topographic map constitutes at least two narratives–both loving–one of scientific activities of practices of observation, sightings, and measurement, and, more importantly and compellingly, a deeply historical one about the glacial formation of the Valley itself.  Mathes’ close attention to the Valley that he loved, and to the shape of the contours excavated by glacial drifts over time, is sublimated in the detailed maps he drafted to track glacial courses and showed how “glaciers take advantage, rather, of the fractures already existing in the rock—the joints by which is divided into natural blocks and slabs,” carrying objects stuck to the frozen ice, and “shod with coarse rock waste frozen in their basal layers” had such “strong frictional hold on their beds” that “as they move forward, though at a rate of only an inch or two a day, they  dislodge and drag forth entire blocks and slabs.” The natural sculpturing of the Valley was tracked, as if in stop-motion photography, in the small arrows that punctuated his topographic rendering of the floor.

Matthes, trained in Germany, used his first geographic assignment to draft the first accurate topographic map of the Valley Sheet in hopes to chart a path of glacial progress across the region.  A scholar of glacial geomorphology, Matthes mapped “the Incomparable Valley” at an unprecedented scale of 1:24,000 or an inch to 2,000 feet.  The map appears a relief map of the Valley’s topography, but records the topographic tracks of glacial flows and provided keys to track the courses of glacial movement that refined the Valley’s form, that substantiated his theories of its formation.  His attempt to investigate the origins of the Valley’s formation, disputed since the 1860s, resulted in a painstaking account of  the “process whereby glaciers excavate to best effect in hard rocks is by plucking, or ‘quarrying’ entire blocks and slabs,” and map the process by which, glaciers of up to 3,000 feet exerted pressure of some thirty tons per square foot, “shod with coarse rock waste frozen in their basal layers, glaciers have a strong frictional hold on their beds; and so, as they move forward, though at a rate of only an inch or two a day, they dislodge and drag forth entire blocks and slabs” (USGS Professional Paper 160, “The Geologic History of Yosemite Valley“).  The detailed result of these glacial flows used a unique iconography to reconstruct the movements of the glacial ice mass, and retrospectively map its progress seven miles across the Valley for his readers to reconstruct its effects. 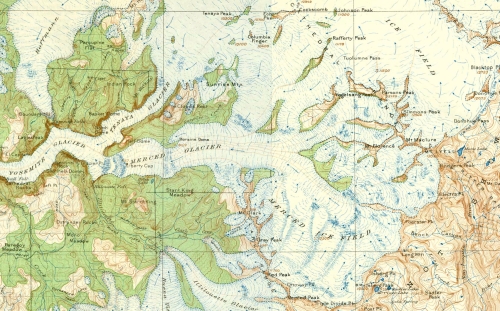 Constructing the map made Matthes realize that he had staked out his scope of life-long investigations in the map, indeed, for although it gave him a huge reputation as a topographer, it confirmed his attention to the creation of landforms, rather than their depiction or mapping, and focus on geomorphology in the remainder of his life, finally transferring from the topographic to the Geographic Branch of the USGS seven years after the survey–which was reprinted as late as 1946, although much of its topographic detail was lost by overprinting–had been published.  The 1946 map of the sculpted floor of the Valley added the shading that he had desired in place of a five-color map, with an artifice and splendor never achieved in later topographic maps of the region, but reveals the amazing attention that he dedicated to the valley in  his 1905-6 survey.  Shaded so carefully to appear as if a relief map, with its exquisite caring detail to basin, crater, ridge, and mountain range, the map organized the Valley’s historical formation in historical time, beyond triangulating sightings of mountain peaks.

One response to “The Ancient Glaciers of F. E. Matthes’ Cartographical Sublime”