In late January, my daughter Clara wrote with conviction that “Great adventures in eating must include the all-important meal known as the dessert,” and confessed “I could not live with out dessert.”  We could all live without desertification, or the expanse of areas of the world on the that threaten to become enlargements of existing uncultivable land, which the United Nations in 2007 declared “the greatest environmental challenge” and a particular emergency in sub-Saharan Africa that could provoke an impending displacement of some 50 million people within the decade.  Several countries have tried to contain the expanding regions of deserts by planting trees, restore grasslands or introduce plants to stem eroding soils, the huge expense of using water and of using water that evaporates as often as it feeds  plants, is far less effective or practical than it might seem as an ecological bulwark.

Scientists have debated and struggled to understand the causes and origins of the growth of deserts across the world, asking whether the underlying causes lie with declining rainfall, a severe drought that began in a period leading to the 1980s, and how to place local measurements of vegetation that revealed flourishing vegetation near barren landscapes of desertification.  The British ecologist Stephen Prince expressed his frustration at assembling a larger picture of desertification based on data that he described as “pinpricks in a map” which failed to assemble a larger picture by studying vegetation from space by using time-lapse photos of the area of the African Sahel caused famines across sub-Saharan Africa to assemble an image that better revealed relations between local conditions across a huge expanse, of which this photograph by Andrew Heavens created a synthetic document that reveals the broad proportions by which the desert encroached on arable land: 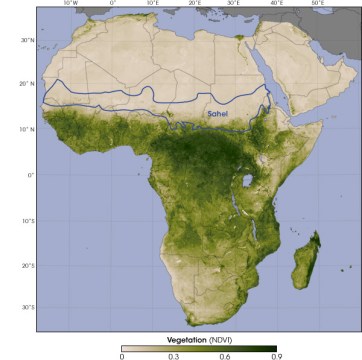 The phenomenon is not limited to Sub-Saharan Africa, moreover, as an image of the variety of microclimates in which the threats of sensitivity to desertification has been mapped in the fertile region of the Mediterranean basin:

The challenge lies in understanding the global proportions of desertification–revealed in the below map that notes expanding deserts by tan bands–in a coherent understanding of the huge variations of local contexts from Asia to Anatolia to Patagonia to Australia to the western United States:

The global risks of desertification–most prominently on five continents–have been dramtically heightened in recent years not only by global warming, but our own practices of land use, the Zimbabwe-born environmentalist and ecologist Allan Savory notes, describing it as a “cancer” of the world’s drylands, a “perfect storm” resulting from huge increases in population and land turning to desert at a time of climate change.  The areas of land turning to desert are not only occurring in dry lands, but in the lack of any use of the land that leaves it bare and removes it from land-use.  Savory has argued in a persuasive and recent TED talk that the global dangers of desertification has multiple consequences, of which climage change is only one.

The growth of areas of desertification are apparent in this satellite view, which reveals the extent of a global process of desertification not confined to Africa’s Sahara, but already progressed across quite large regions of both North and South America as well, on account of rapidly accelerating changes in micro-climates world-wide:

The expanses of desertification are even more apparent in a global projection of our newfound vulnerability to desertification, that illustrates the massive degree of changes in the world’s land, in part effected by the bunching and moving of animals, largely encouraged by federal governments who reduced the lands open to cattle grazing in the belief that good land-management practices meant protecting plants from grazing animals: 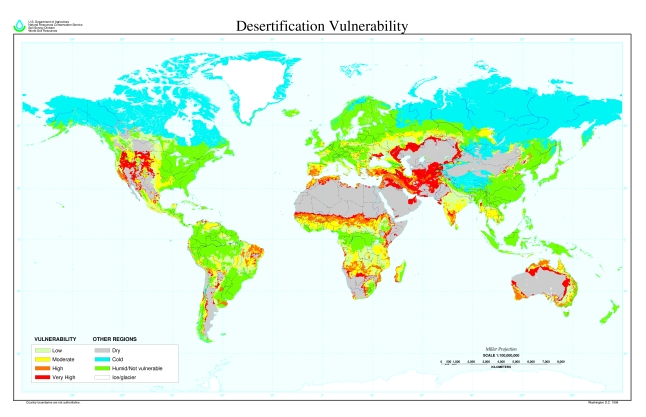 The above map made by the United States Department of Agriculture-NRCS, Soil Science Division, reveals the dangers of expanding desertification at an extremely fine grain. We can view this map by highlighting the expanses threatened by increased desertification in this world-wide satellite view, whose regions ringed in red highlight the areas of a dramatic increase of desertification and an apparently unstoppable cascade of deep environmental change and release of carbon gasses:

The difficulty of understanding the causes of desertification arose from a deeply unholistic ecological view of the nature of microclimates begun 10,000 years ago but rapidly increasing now.  Savory asks us to relate this to the hugely artificial contraction in the number of herds grazing land seen in recent years, creating a resulting very high vulnerability to desertification–noted in bright red–that would result in carbon-releasing bare soil, threatening to increase climate change, much as does the burning of one million hectares of grass-lands in the continent of Africa alone.  Savory argues that the only alternative open to mankind is to use bunched herds of animals, in order to mimic nature, whose waste could act as mulch help to both store carbon and break down the methane gases that would be released by bare or unfertilized–and bare–soil.

Such mimicry of nature would effectively repatriate grasslands by introducing the planned pasturing animals and livestock like goats to regions bare of grass or already badly eroding–and has lead to the return of grasses, shrubs, and even trees and rivers in regions of Africa, Patagonia and Mexico, with beneficial consequences to farmers and food supplies.  By the planning the movements of herds alone, replicating the effects of nature can turn back the threat of desertification by movable herds of sheep and cows, already increased in some areas by 400% to dramatic effects of returning grasslands to denuded regions of crumbly soil and straggling grasses.  Even in areas of the accelerating decay of grasslands and growth of bare soil, Savory argues, we can both provide more available food and combat hunger through planned pasturing, and reducing a large threats of climate change that would remain even if we eliminated the worldwide use of fossil fuels.  He argues that we can both take carbon out of the air and restore it to grasslands’ soils that would return us to pre-industrial levels, based on a deeper appreciation of the ecological causation of desertification and by replacing rejected notions of land-management, actively reducing the frontiers of desertification.  Although Savory does not note or perhaps need to call attention to the risks of the huge displacement of populations and consequent struggles over arable lands, planning the repatriation of land by animals would provide mulch and fertilizers to rapidly effect a return of grasslands in only a manner of several years.

The prognostication of the expansion of the desert is not often as mapped as the rising of ocean waters in the media.  But it may offer a more accurate map of the alternative over the next fifty years, and hint at the huge attendant consequences: 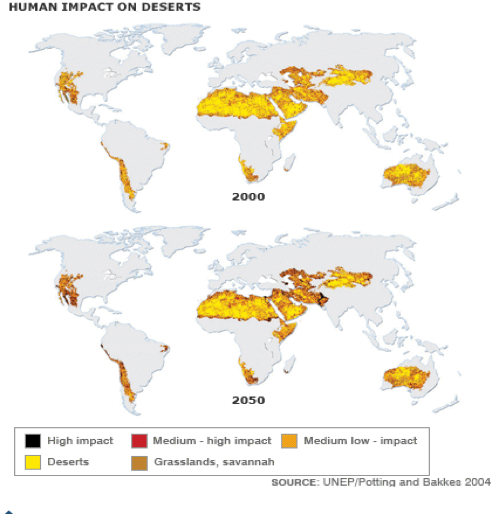