Whereas the criminalization of marijuana over the past decades strove to push the stuff literally off the national map, the last election opened up the frontiers of the legalization of pot in ways one could scarcely imagine in previous decades.

For the rethinking of the efficacy of a “war on drugs” offered a new map of the legalization of cannabis as a recreational pursuit and legitimate business.  The rise of legal marijuana dispensaries in many states of the nation have created yet a new manner of mapping our national divides–itself a favorite national past-time.  From the illustration of which states have enacted laws of marijuana legalization as a substance and, increasingly, as a crop– 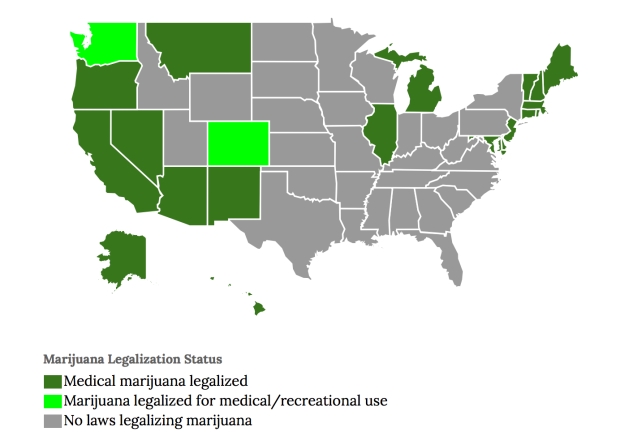 –or, to offer a more updated account of “decriminalization” as well as “legalization” in a map of quite unharsh lavenders, light blues, and sea greens:

Only recently, the newsletter of our local organic farmer, while allowing the stupidity of “trying to outlaw a plant,” took the time to explain to his customers that, despite some demand for the inclusion of the crop in the harvest boxes currently on offer from his farm, “medicinal herbs” long lay off of his radar, and would involve him with a “milieu of doctors, patients, quacks, drama, stress, illness, research and recovery” that were not quite what he had ever planned to dedicate himself:  “just because marijuana is legal doesn’t mean I choose to grow it,” Andy explained, while offering that the past two years had already seen a “green rush” on farmlands in much of Central California, grabbing land in the hopes of its future legality as a crop in ways that have placed a new pressure on renting and locating greenhouse space as marijuana growers are posed to drive up rent–although the market for growing grass has also attracted a new demographic to agricultural farming, in his opinion leaving us posed to have an oversaturated market.

–but we’ve only begun to navigate its availability on the ground, trusting perhaps on the free market to provide for weed dispensaries in many states that have recently “gone blue” of making it legal, creating islands of legality in a sea of decriminalized (if illegal) orange, and sites where it is illegal (red) or where its illegality is less often enforced (pink).

These broad brush-strokes of cartography demand a far finer grain, or course–to show their impact on the ground.  And a finer grain has arrived with the entrepreneurial folks at Weed Maps who have painstakingly collated, shortly before the vote for legalization, those local dispensaries where medical marijuana was available.  The topography of pot was delineated with qualitative ratings, offering a range of scale to which one can zoom to reveal a geography of availability and even openly ranked dispensaries that are perhaps the closest available we have to sanctioned standards.  Users can click on the clickable icons of dispensaries that appear on the screen with precise geolocation, differentiating “laboratory tested” from, presumably, riskier, and delivery services from in-store only.

A Google Maps template essentially provided a new iconography of pot, particularly useful when one is addressing customers and taking laws for medical cannabis at their word.  Issues of legibility and economy in a map lies always at the crux of cartographical invention, and we might look at these early models of mapping as a sort of prototype that has sprung up on a website that includes such euphoric messages of encouragement of abundant capitalization as “Congratulations Washington!  Legal Weed Has Arrived!” and ponders “What a long, strange road to legalization it’s been in the Evergreen State.” Consider the local density of outlets in the Bay Area, in a map offering a busily synoptic overview of the rich efflorescence of the weed economy, as a promising point of departure:

Hard to read, you may say, and too crowded and complex in its iconography, not to mention for readers with occasionally addled brains?  The interactive map produces its best results by hovering over specific sites, but in the large-scale version just gives an idea of the abundant range of buying options available. But let’s just focus on buying clubs around the East Bay:

and take advantage of the range of ratings and select reviews that you would not usually expect to find on Yelp!:

or, to restrict oneself to both recreational AND lab-tested–

or, shifting the geographic terrain a bit to a nearby destination, to explore the rankings of regions closer to the Sacramento foothills:

And you might do a double-take at finding out how quickly demand has driven the rapid growth of dispensaries that have sprouted up around greater Seattle: 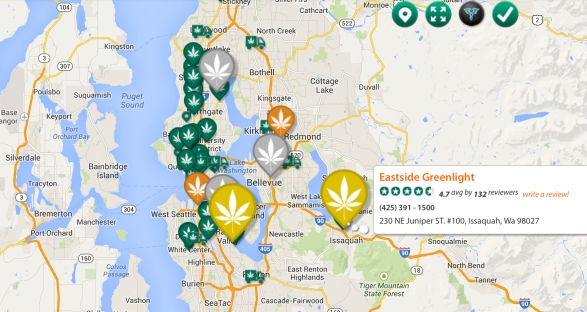 For this inventive appropriation of the Google Maps API and the ranked range of selectivity that might best suit the searcher of legalized cannabis, we have to thank the folks at “weed maps” for the mash-up, even if one wished they used an OSM base map, whose “open access” options might allow easy mapping of the proliferation of future sights of sale.  Even though recreational use of marijuana is not legal in 48 states of the union, Weed Maps CEO Justin Hartfield, a visionary and a man on a mission, projects annual earnings of upwards of upwards of $30 million, and uses his mashup as something like a crusade to keep marijuana in the hands of user.

The iconography of mapping marijuana’s availability can get curious as an early mashup.  Often, for example, despite the inventive and unconsciously playful iconography, one gets some nice visuals, but most maps are often all too crowded–as one can already see in those of the Bay Area, with information and odd juxtapositions, as in the proverbial New Jersey delivery truck seeming poised to carry cannabis to Manhattan through the Holland Tunnel–

The API reveals some nice “weed islands” that will be useful to note, even in states where legalization is the norm, as Rhode Island. 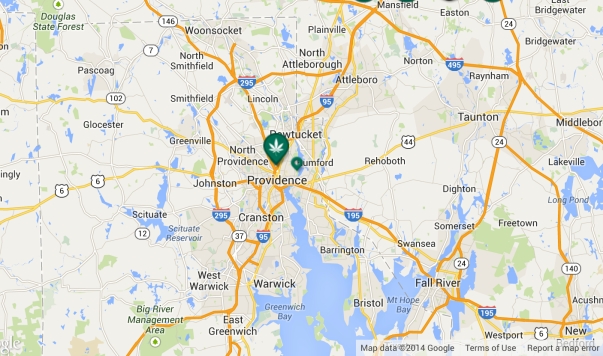 While quite rudimentary in design, the proliferation of push-pins pointing to places to purchase pot posit a pivot in themselves in the changing topography of cannabis in the new millennium.  More than anything, it just shows the relative rapidity with which marijuana is openly on the map. So, go forth and map?  It’s a lot easier to negotiate the topography.  Hartfield himself boasts at having lit up “almost every day” for fifteen years, as a medical marijuana customer who was impressed with the extreme openness of information about pot options at his local dispensary, which gave him the idea of mapping quality and availability, so that “people can do their own research.”

Mapping such a mashup seems a start for revealing something like a new landscape:  if legalization advances, of course, as advocated quite recently by the New York Times, the newspaper of record, and the ranking of quality reaches mainstream consumers, the WeedMaps ratings system might merge with or be overwhelmed by Yelp–although the data already accumulated, and the audience that they’ve reached, seems to put them a leg up.  “We know more about the plant and love the plant,” Hartfield observed, perhaps with something of a sly smile, “than anybody else.”

Despite the complex global landscape of legality–

–the excitement of this islands of blue largely on North America’s Pacific coast have created considerable commercial interest in the possible open markets for pot.