Not to be confused with the “historeme,” the ‘smallest unit of historiographic fact’ or narrative event in its singularity, the Histomap Rand McNally first printed in 1931 offers readers an assembly of singularities in color streams that, when fully unfolded, expands to five feet.

One would assume the map effaces singularities or any singular historical narrative–the selective condensation of information to an image five feet in length in the Histomap can’t be beat for charting a balance of power among world cultures, reifying the state and racial difference as the metric by which to map world history. 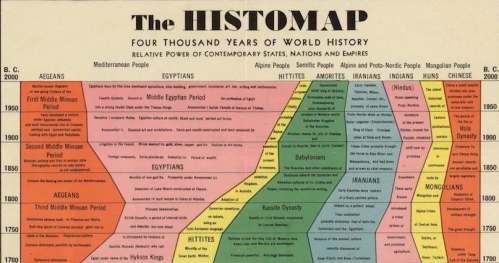 Convenience and efficiency are both premiums in its design.  As other early twentieth-century compendia of knowledge, the map glories in positivist  presumptions of mappability:  rather than offering narrative, the map offers the inverse, apparently obliterating any local meanings:  it homogenizes four thousand years not by relinquishing narrative structures, but using a racial rubric to map states’ “relative power.”

The synthesis is not disinterested, of course, or as empyrean as John B. Sparks might have believed–or the publishers who sold it as dramatizing “the great adventure of mankind” so that it can be perceived at a glance, in a form that is clear, vivid, and shorn of elaboration.”

The metaphor of relations among world powers offers an optic for Sparks to digest world history by mapping “relative power of contemporary states, nations, and empires” among “Mediterranean Peoples,” “Alpine Peoples,” “Semitic Peoples” and “Mongolian Peoples” before such a conceptual model in fact existed, presenting unique streams of racial difference as objective and disinterested as a five-color map. And readily represented.   Comparisons between cultures’ relative prominence provides coherence to order and organization of global history.  With lists of events and names disembedded and re-synthesized in a fabricated whole–and all recorded time rendered consultable on the indices of a regular and uniform timeline–the wall-chart maps a gloriously abstracted vision of time and space, in ways that demands the sort of intensive reading that is far less easily digested than Sparks probably hoped.

It’s hard to know what’s not to like about an “actual picture of the march of civilization, from the mud huts of the ancients thru the monarchistic glamour of the middle ages to the living panorama of life in present day America”–with its claims to orient yourself to the inevitable progress of world civilization to your doorstep–except pretty much everything.  The assurance with which it charts streams of empire would be reassuring–were it not for the many blind-spots in this “actual picture of the march of civilization.”

The genre of “historia mundi” had many competitors, including Edward Hull’s picto-cartographic 1890 Wall Chart of World History, which began from the Garden of Eden and “The Settlements and Races of Noah’s Descendants” from the Book of Genesis, in the fashion of a medieval European world chronicle, placing lineages of generational descent above panels mapping Ancient Egypt, the Persian Kingdom, the Seleucids, and conquests of Alexander the Great. 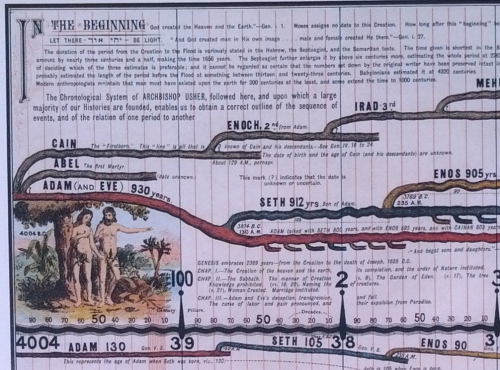 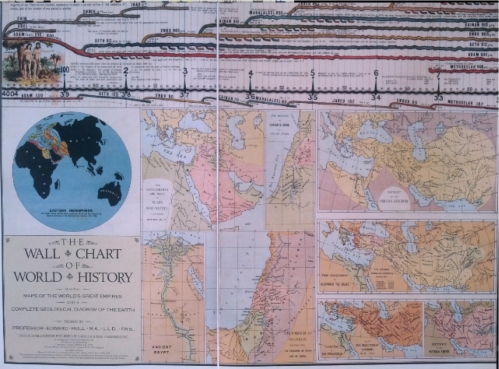 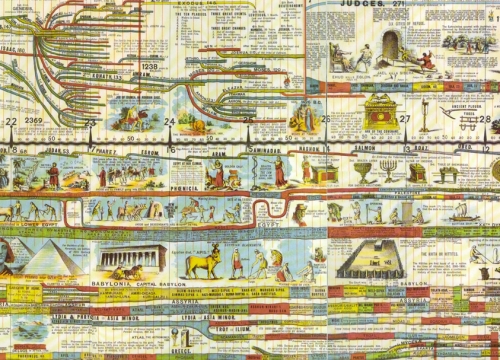 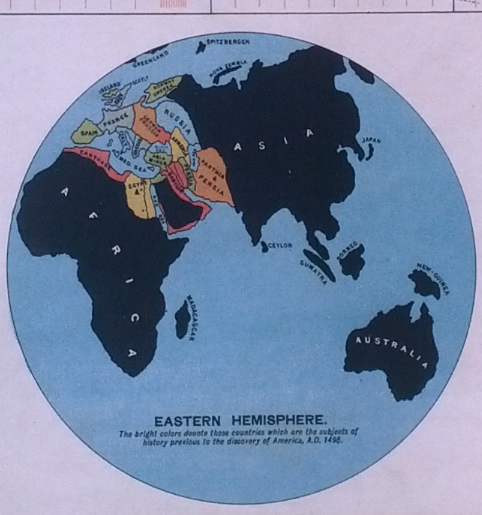 Sparks devised the Histomap as both more ecumenical and empyrean in its economic individuation of purified vision of history, and more global.  Its color-keyed streams are readily comprehensible consultation of the lay reader, but the green dust jacket assured prospective they would be overwhelmed by “the fresh realization of the very recent insignificant contribution to history of those we are accustomed to call great men,” as the map would leave them “enthralled.” 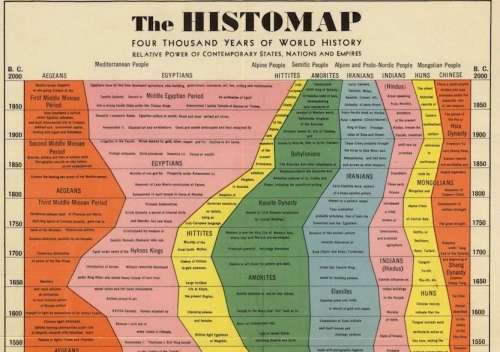 Starting from the Minoans and the Settlement of the Nile Delta, this occidentalist condensation of some four-thousand years “relative powers of contemporary states, nations, and empires,” is the distillation of an era of state-building–a narrative to which it accommodates the dynastic division of time among the Egyptians Ammorites, and Chinese, to digest their otherness in a river of time.  By erasing the Neolithic, as it were, the streams contemporaneously arise, like Athena from Zeus’ head, with the force of a declarative statement.

Each stream is distinctly separate, and as one wanes another takes its place to expand, in the uniform frame of mankind: 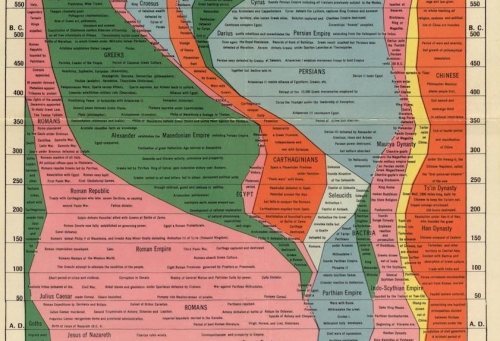 Geography (as globalism) is a big casualty in this visualization of time, indeed, as one stream–here the Roman–comes to fill the viewer’s field of vision from around 150 BC, as it fills not only the historical record, but the balance of world powers.  Although this was long before the notion of such a balance existed or was understood, this was the optic in which Sparks so skillfully visualized a universal history, and, more to the point, made sense to lay readers of the 1920s and 30s.

The notion of a balance of actual power is never explicitly defined, but informs the role of responsible custodian of world civilization–the frame or the tacit rubric of the flowchart.  This maps with the medieval blip of the Arab World before 1000 AD, or until the Byzantines, Franks, and Holy Roman Empire get their act together as European culture’s weighty forbears– 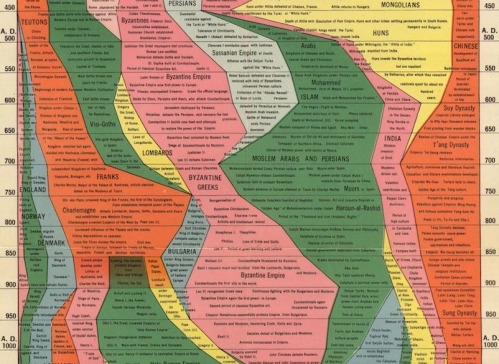 –a role that, after 1700, England temporarily occupies.  But, in the end, there is a sense of “sic transit,” as Anglophones and their satellites, from the United States to Europe and South America, confidently hold the lion’s share of three-quarters of the spectrum of world history–and Rand McNally still offers what it now calls the “Time Chart” of world history, suggesting the vision’s considerable success.

Buddha, Confucius and Lao Tse are situated in relatively thin currents of color beside the ballooning of the Median Supremacy, after which bulge the Greeks, culminating in the in Alexander the Great’s fairly sui generis empire, all of which normatized to the convenient dimensions of a synoptic flowchart that unfolds over five feet. 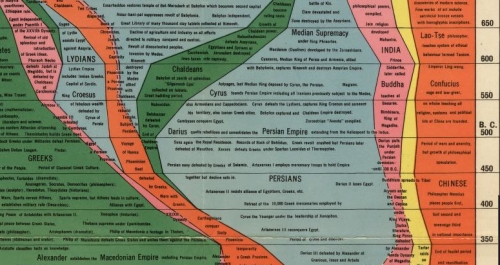 I love this particular soundbyte on post-Confucian China: 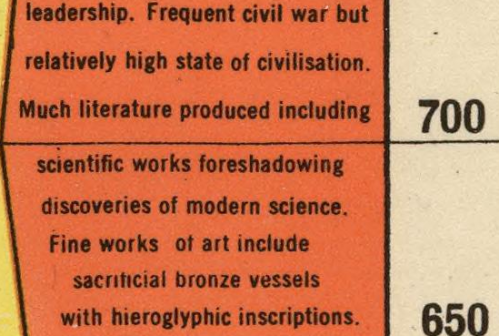 Every culture makes its own maps; most maps are made for the cultures who read them.  It would be a neat exercise to map geographic coverage in these historical condensations over time, along, perhaps, with contemporary encyclopedia. Or even to take a purely visual example, the logo of the Heilbrunn Timeline of Art History does well to juxtapose material evidence from historical periods with a nod to social issues and a changing ArtStor cast of characters, although ones who are similarly not situated in a geographic space.

2 responses to “Reading the Histomap”