The rise of internet news sources may have threatened printed news outlets.  With diminishing number of news desks and reporters, the story goes, the reduction has qualitatively changed both the variety and sort of news that is consumed–and a dependence on a far narrower range of streaming news.  The political volatility or extremism of news outlets has either further diminished the spectrum of news stories, or is a symptom of a shrinking pot of funds that is devoted to news.

The news has long co-opted the global map as an emblem of its comprehensive integration of news stories from the entire world:

Or, more directly overlapping the globe with the corporate news logo for TV: 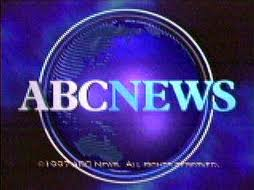 Is the global coverage of the news more exaggerated than such emblems would suggest, as is suggested by a focus on Europe or an Anglo-American Atlantic?  Perhaps a better image is suggested by this other news icon, suggesting a relay of privileged sites of information that is synthesized in newscasts.

A recent map that’s been getting considerable attention reveals another side of this story: the increasing number of regions in the world where news reporting, and journalists are restricted for reporting, censored, imprisoned or attacked, based on this map of the regions where journalism was suppressed in 2012.  Despite the limited informational value of the map as a visualization of data, it reveals the increasing global reach of attacks on journalism.

The constraints that local political regimes have come to place upon their own local reporters has, inadvertently for some, restrained the global claims of a news media that relies on local informants and news sources.  And the result is a shrinking of what one could best call the known world.  According to the Committee to Protect Journalists, who provide some of the fullest documentation of attacks on journalists worldwide, at

the imprisonment of journalists has reached a record high in 2012, which is a concern for global concern.  How can we continue to map news sources if we must blot out an accurate picture of the entire map?  According to their site, “Large-scale imprisonments in Turkey, Iran, and China helped lift the global tally to its highest point since CPJ began conducting worldwide surveys in 1990, surpassing the previous record of 185 in 1996,” often on “anti-state charges such as terrorism, treason, and subversion.”  In countries as Eritrea and Syria, there has been a virtual black-out of some news sources, with record numbers of journalists jailed without anything resembling due process.  The blackout continued across the globe in a scary manner: “Vietnam, Azerbaijan, Ethiopia, Uzbekistan, and Saudi Arabiarounded out the 10 worst jailers. In two of those nations, Azerbaijan and Uzbekistan, the authorities used retaliatory charges such as hooliganism and drug possession to jail critical reporters and editors.”  In Turkey, Mehmet Ali Birand, the editor of Istanbul-based Kanal D, noted that tatutes “make no distinction between journalists exercising freedom of expression and [individuals] aiding terrorism,” said Mehmet Ali Birand,tatutes “make no distinction between journalists exercising freedom of expression and [individuals] aiding terrorism.”  Iran has jailed 45 journalists outright since the lack of certainty as to the results of the 2009 presidential elections.   Eritrea holds the fourth highest total of journalists worldwide in jail, none of whom were ever charged with a crime.  The virtual criminalization of journalism that led to an increase of imprisonment of journalists of 23.4% in 2010-11 has climbed to further 29.6% in 2012.  Despite significant numbers of the imprisoned being online journalists, print journalists constituted the second largest group of those imprisoned worldwide.

To be sure, the worldwide number of journalists who were killed since 1992–a more extreme retaliation–are more narrowly distributed world wide. 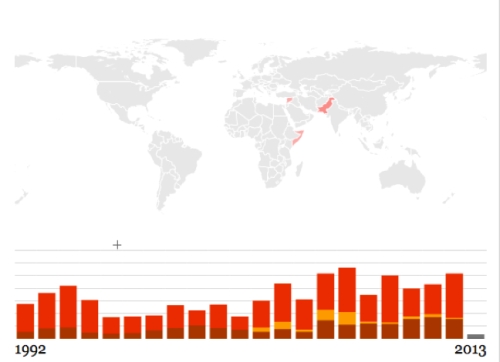 One can see echoes of the detainment of journalists in Eritrea and Syria But the growing number of pockets–and indeed larger regions that are identified with legitimate states–where the news is blacked out or not accessible is perhaps one of the most dire threats to comprehensive coverage.  Perhaps a better metric is the startling rise of the number of journalists imprisoned worldwide.

The areas that have imprisoned large numbers of journalists might be likened to news swamps, where news is filtered or obscured, or never reaches the light of day.  These nations, with the greatest offenders colored red and sized to fit  the scope of their silencing of news reporters, are

This is one map to pay attention to when reading the news.