If Santa Claus is global, the image of Santa living in the North Pole outside of sovereign divides has been elevated to a new horizon of expectations in the age of real-time maps. The question of “Where is Santa?” now can be responded to on a real-time viewer, prepared each and every Christmas Eve for over fifty-fie years, the North American Aerospace Command. For since the Cold War, and through the present age of smart phones and real-time tracking, NORADh as invited viewers all over the world the chance to track the gift-laden sleigh of Santa crossing the night-time sky at the speed of starlight. Never mind the different hours and expectations of Santa Claus in different nations or countries. For NORAD allows the world to track the flight of Claus cum reindeers on NORAD’s Santa Tracker, an annual collective exercise in mapping of increasing popularity, moving the image of bearing gifts into the globalized world.

Indeed, the mind-boggling proportions of its popularity, attracting upwards of 20 million individual users in 2011 alone, is a statement not only to its improved UX, but to the versatility of its incorporation of mapping servers better to imagine the itinerary of Santa’s airborne sleigh.  For while we once envisioned the night-time flight of Santa Claus far-off and against a starlit sky and full moon, to accentuate the surprise of a magical sled-borne itinerary–

–the Santa Map brings that journey up-close for everyone before a computer monitor, following a sort of sleigh space that is the surrogate for airspace.  The remapping of Santa’s itinerary has been done in a way that tracked, as the sleigh’s global progress is intercepted and relayed online in real time from posts of remote observation to viewers around the world.  And in an age of global surveillance, there seems to be no reason why Santa’s sleigh cannot as well be surveilled for the interests of children everywhere.

There’s a huge appeal in the ways that the Santa Map creates and imagined community, as much as it embodies an annual itinerary.  The interest in tracking Santa’s sleigh has grown considerably in recent Christmas Eves.  The huge interest in tracking Santa’s sleigh–and effectively mapping the visits of the airborne sleigh into our hearth–is a way of bringing maps in line with pleasure at a time when we need to look for solace where we can find it, and where we can find a comfort that the onslaught of most maps of contemporary events in fact rarely provide.

Christmas has been a communal but solitary experience–located in the hearth and around the tree, and gift-opening a ritual of individual families–but somewhat serendipitously, the collective witnessing of the Santa Map offers a vicariously removed experience for crowds of viewers, removed from one another but creating the illusion of comprehensively witnessing the arrival of a fictional character to homes everywhere, as if to knit us together in holiday wonder, suspended for the evening in an imaginary international airspace of momentary world peace.  In recent years, but perhaps since the Cold War, this particular image of good cheer provides the odd inversion of the danger of the military missile strikes, if not offering the miracle of suspending fears of missile strikes, or the contradictions implicit in imagining peace in a world that lies on the brink of global war by using the very tools to chart missile defense systems as instruments of good cheer. Santa may face a different workweek in the malls where he can now be met in many different nations–as he traverses national borders with different work weeks!–

–but the folks in the U.S. government and NORAD it completely reasonable to have the right to track the geospatial complexity of Santa’s sleigh ride, without removing any mystery out of Christmas holidays. It may be even reassuring that if Christmas Eve is Santa’s busiest hour of flight, the arcs of where reindeers guide his flightpath can be illuminated on our devices, in vivid geospatial specificity and even local detail.

In the year 2025, a seven year old girl looks up at stars against the “deep, black” night-time sky, remembering that her stepmother as a child could once not see their “cool, pale, glinting light.“  Octavia Butler sets the scene for her cautionary tale, Parable of the Sower, with the child’s stepmother uttering two words–“‘city lights‘”–unable to conjure the historical changes of nocturnal luminescence during her life when stars have become unable to be seen in the night sky.  “‘Lights, progress, growth, all those things we’re too hot and too poor to bother with anymore,’” is all she was able to haltingly explain.

The notion of a “star-gazing station” that pops up along the highway may seem an improbability today.  But driving an hour and a half north from Toronto, just north of Napanee, one passes a Dark Sky Viewing Area, that offers the chance for volunteer-led star-gazing, where knowledge about viewing night skies are eagerly passed down, as if out of Fahrenheit 451, offering opportunities for amateur astronomical observation of geminoid meteor showers at the “most southerly dark sky site in Ontario,” where increased stellar visibility confirms that one has moved sufficiently away from the hyper-luminescent United States to “natural brightness” to view the Milky Way in all its glory.  The designation of “natural brightness”–or darkness–suggests a growing need to reckon with the geographical limits of night-time illumination.  North Frontenac, the Royal Astronomical Society of Canada   assures, offers surroundings suitably dark in fifteen km in all directions to be designated a “Dark Sky Preserve Status” for viewing night-time skies as they once looked.  The Star Gazing Pad invites all with telescopes in what seems a throwback to the popular astronomical observations of Victorian England, but responds to fears of the unprecedented skyglow and the augmented illumination of night time skies. 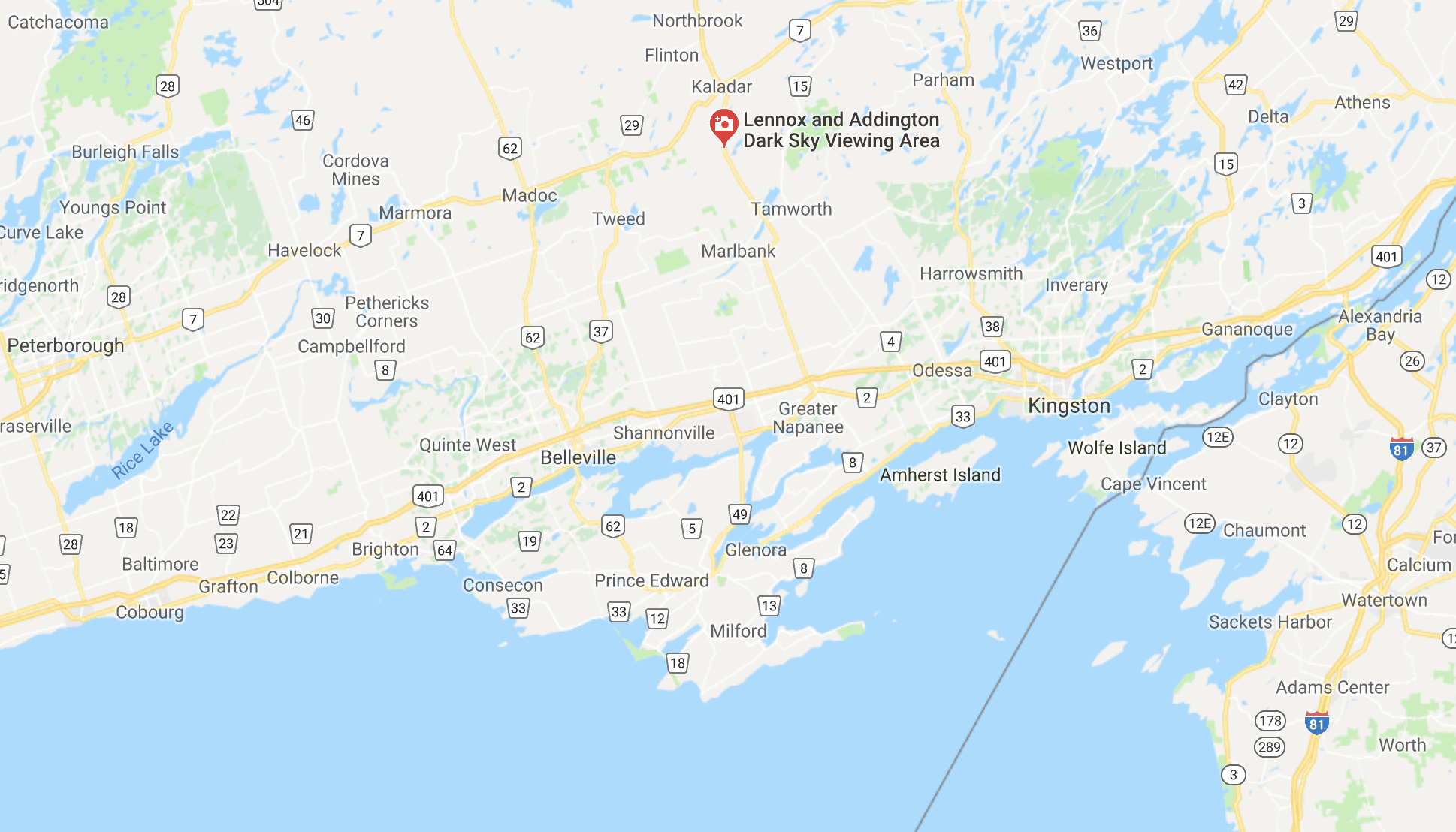 Driving north from the border today, one arrives on the 401 in “dark sky country,” as if a definitive passing of the border, north of Kingston and Lake Ontario, removed from the nocturnal glow of city lights, which promises to provide the “night sky experience very similar to what was available more than 100 years ago,” promising visitors the chance to “witness–perhaps for the first time [in their lives]–how the night sky is meant to be seen.”

Again, the question of the geographical boundaries of “natural brightness” and “natural light” are called into question by sites of such “Dark Sky Viewing Stations,” which have grown rapidly in Canada as preserves to “save the stars from light pollution.”  The United States was the foremost model for Butler’s cautionary tale of a post-apocalyptic future, when stellar visibility had only just returned, but only did after the decline of a world in which increasing artificial luminosity had long removed the stars from increasing portions of mankind.   The vignette helped situate readers in a time just after a global collapse, where villages and cities are walled from roving gangs of drug-crazed marauders, and any semblance of security or infrastructure is gone from memory, and has faded into a past that few save the old can recall.  Lauren protests to her stepmother “there are city lights now” which don’t “hide the stars,” but the older woman is only able to shake her head in response, trying to summon earlier skyscape, and describe the changes that set the scene for the dystopia they now inhabit:  “There aren’t anywhere near as many as there were.  Kids have no idea what a blaze of lights cities used to be–and not long ago.” Lauren tries to recuperate an even earlier sill of reading the stars by an astronomy book that once belonged to her grandmother that allows her to decipher constellations she is now able to trace, and are newly visible in the night-time sky, using its maps as the sole means to be able to glimpse the stellar order seen in the night-time skies of bygone eras.

In ways that give a new sense to “dark data,” techniques for mapping of the absence of light from an increasing share of the world suggest a new understanding of “place” that commands attention in multiple ways.  The Bay Area where I live can already be seen from the sky from the International Space Station, as photographed by astronaut Randy Bresnick photographed it in one of his final trips about the planet, that bear shocking witness to the expanse of populated lands that illuminate the growth of streetlights in the Bay Area, where intense luminosity stretches from San Jose to the Carquinez Bridge:

The experience of the extreme intensity of urban blazing is echoed in the quite timely appearance of an atlas of night-time space.  The use of satellite maps to chart the extent to which artificial light has come to compromise the night-time sky over the past fifteen years.  For it reveals the global scale at which the growing impact of light pollution on the diminished darkness of the night-time sky not only around once sacred areas, like Stonehenge, but stands to change our sensitivity to the perception of starlight, and experience of a non-illuminated world.   At one time, the definition of astrological constellations provided a basis to organize time, space, and prognostication, they offered natural guideposts for maritime navigation–as the girl in Parable of the Sower seems to suspect, even as she struggles with the absence of many clear keys for their interpretation.  If Butler suggested the dark future of no stars in an alternate world of the future sometime shortly before 2024, by which time the dark sky has returned, we see little point of turning back in the maps of the over-illuminated world presented in the first-ever global atlas of light pollution atlas.

The atlas suggests we won’t so easily return to an unlit world–or at least won’t return save after a similar apocalyptic massive destruction of the over-industrialized world.  The recession of stellar visibility is only beginning to be fully mapped in full, but the ever-narrowing window of night-time perception of stellar visibility seems quite timely.  The global spread of man-made light pollution is the direct consequence of living in what historian Mathew Beaumont first described as “post-circadian capitalism” back in 2005– a condition where work-time is no longer governed by a clock, or biological rhythms of sleep, but both flexible employment and 24-7 economies have effectively expanded the working day to a continuous job, often enabled by continuous illumination. If Beaumont, following Jonathan Crary, has seen the sleep-deprived working worlds of the globalized world that denies the value of rest–or allows one to deny it–the attempt to process the global absence of darkness demands to be grasped as evocatively as Butler began. And one is pusehd to do so by a recent collection of the diminished global levels of starlight and stellar visibility, which invites us to try to survey what a sky without stars would be.