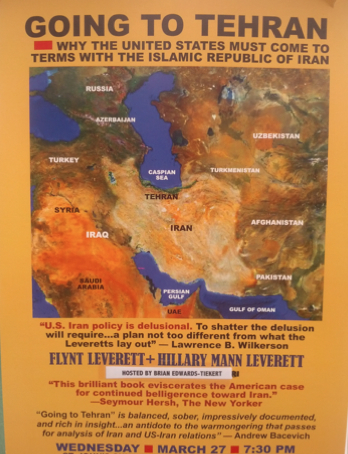 It’s hard not to admire the design of this poster that advertises the coming talk of Flint and Hillary Mann Leverett.  It’s not a secret  to readers of this blog that maps make great, cogent arguments:  and even a map without a clear road map or national boundary lines–or noting cities or centers of inhabitation.  This map effectively uses the lay of the land to shift the pragmatics of mapping our relations to a country and region poisoned by political posturing, and how–in a world without clear boundaries–it makes no sense to continue to demonize Teheran as a site of terror or the prime site of nuclear threat.  (It’s not as if non-proliferation treaties are in vogue across the rest of the globe.)  After years of some pretty oppositional if not Manichean rhetoric, shifting the map, emptying it of the targeting of danger is sane and salutary and quite a relief.

It is a counter-map to militarized map to distort actual geography and, whose cold-war paranoic cartography that imposes the ranges of missiles arrayed as geometric concentric rings on the land, designed to provoke panicked visions and activate one’s amygdala. 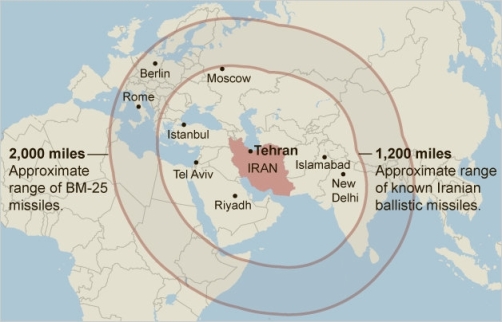 If we retain a memory map of the 44 active bases of the United States Army that surround Iran in eleven surrounding countries, most of which share borders with Iran, we could just as easily offer a different and equally compelling map of fear.

The all too familiar military map below presents an even more haunting spectre of a military scenario all too easy to map. (The German text might underscore the active belligerence of the red missiles streaking from Tel Aviv toward Fordo, Arak and Isfahan, or the red Israeli Dolphin U-Boats floating in the Arabian Sea.)  Those provocatively elevated anti-aircraft guns noted in black in Iran map the seat of militarism and violence, unsurprisingly, that naturalize its military threat in the landscape of the Middle East.

It’s not a surprise we need to create another and radically different map of the region, and do so by a counter-map of aggression.  The swirls of yellow between the Persian Gulf and Gulf of Oman to the Caspian Sea conjure the muddiness of our maps of the region and benefits and needs of remapping its place in our spatial imaginary.