The disorientation of “environmentally-induced” Attention Deficit Disorder is not the result only of a piling up of diagnostic categories:  it is a piling up of detailed sensory stimulation, a lack of filters for hedonistic pleasures, an assault on the senses that defies information overload but approximates a disorientation of sensory overstimulation:  if ADD hyperactivity made it into DSM IV, entering a Whole Foods store and not knowing which aisle to walk down, even though you have entered the pleasure palace only in search of a tooth brush or some strawberries, is a bit of an induced disorganizational phenomenon in itself.  You find yourself under some sort of assault in a land of such overwhelming abundance where objects cry out as if you really need them, and sales assistants, who have the right to give away up to $20.00 of goods per day if it will boost sales, beckon with potentially enticing trays of moist carrot cake or fresh juices, all of them hard to ignore.  The attention to accumulating all of these goods under one rooftop and in such an attractive display makes it difficult for one to sustain attention to the task of shopping, or getting what one needs for the menu in your hand, as the culinary details with which one is assaulted or to which one is invited to be privy lead to repeated careless mistakes about putting things into your shopping cart.  Being “often needlessly distracted by external stimuli” (criteria number 8 in DSM IV) become a way of life when cruising that supermarket aisle, not to mention difficulty organizing things necessary for tasks (number 7), in this case leaving the store.  (Perhaps one also encounters a difficulty awaiting its turn to enter DSM V.)

This is an odd permutation of the cult of self-identifying as a locavore, or circumscribing the terrain from which cultivated food will be consumed to a restrictive radius.  As we discover the American terroir in our kitchens with Rowan Jacobsen, indulging in the locality of geographically specific flavors, we’re apt to wonder where we are even as we fantasize about the benefits of living off the land.  It’s no doubt in part that we need to remedy this sense of dislocation–of remove from the sources of our food–that we rush headlong into sourced tastes.  But there is something odd about being offered a geographic pedigree of locally farmed food and not being able to process whether you really need to relocate it into your refrigerator, or  single origin beans on whose origins you can’t place a value.  The collection in our high-end supermarkets of vegetables of excellence provenance, identified by agrarian footnotes beside their price tags, often seems intentionally and oddly disorienting in itself. so culturally removed is our own map of the origin of eggplants, apples, cranberries or kiwi from our sense of where we are and the reasons why we entered into this store, anyways.  Is the scholarly apparatus on those placards informative or a nagging distraction?  It is hard or at least a challenge to hold in one’s head the map to which objects of fixed provenance in the supermarket correspond.

But the cost is one of extreme disorientation as one enters the brightly-lit floor of the local supermarket that caters to such high-end locovoric tastes.  It is one thing to have a map of terroir on the wall in a wine shop for customers; the map is a tool of identification and situation of the grape or the vine, and demand a degree of expertise (or map-literacy) to be read.  There was a clear identification of provenance in an ice-cream store that boasted to use only the milk of family farms in Vermont for its super-premium blends (as did, at first, and to some extent still, Ben & Jerry’s) or the ice-cream pleasure palace in Bologna, Italy, that claims to use only milk from the Romagna (the local region surrounding the city in north-central Italy) to make its highly saturated super-rich gelato (la Sorbetteria Castiglione)–but locovoraciousness looses focus as it is staged in a setting of consummate marketing and, its counterpart, hedonistic consumption.

As if response to the criteria of sourcing vegetables from a ten-mile radius at some local farmers’ markets in the region, the folks at Whole Foods have offered to clear this up for customers in an on-line local foods map that allows us to look at what local goodies stores offer across the country–even though this can help us sort the information overload of the aisles, as we look scour the country for the locally produced goods that might be available at our own Whole Foods outlet–or develop the sort of eco-lust of a committed locovore at the foods available to other Whole Foods customers around the country, leaving one only to gaze at the mapquest image to dream of purchasing foods in other supermarkets of brighter  aisles.  The idea is to think local, but market nationally.

One kind of looks only at the geography of the sort of foods one wants to eat, in other words, as much as the folks that live there.  A similar problem of mapping goes on in the supermarket.  The question is how to map the abundance, and how to map the variety of distinctly sourced goods.  That there is little seasonal variation to inform the vegetal abundance in the aisles of supermarkets increased the disorientation; one finds year-round tomatoes from Mexico or plums and berries from Chile that have organic claims.  Flourescent lighting doesn’t help, and the nicely lit fruits and vegetables, often under their own miniaturized rain-showers, beckon with a take-me-home sheen as the mute locally farmed sirens of the produce aisle.  A simple aisle-map won’t suffice since the sensory stimulation of the store makes it hard to not enter its labyrinth.  Perhaps we’ll all be better encouraged to take Ritalin before going shopping in the future, or acquire better filters to screen out beckoning samples and signage that boasts fidelity to locally farmed goods, if one adopts a generously restrictive meaning for the term.

The disorientation is not only geographic, but sociological.  Of course, when we are looking with lust at those avocados, red cabbages, plums, and apples with a sort of existential desire, it’s tempting to forget the rest of the world and its social geography, so much is the origin of the apple the prime focus of our ecological concern.  Not many folks even enter into this flood-lit arena of healthy and tasty treats.  Matt Iglesias’ retweet of Jarret Barrios’ division of the geography of Whole Foods v. Wal-Mart stores in the Bay Area maps a nice geography of consumption patterns, even if one allows that Wal-Mart is interested in buying cheaper real estate, in terms of the markets that each chain store caters: 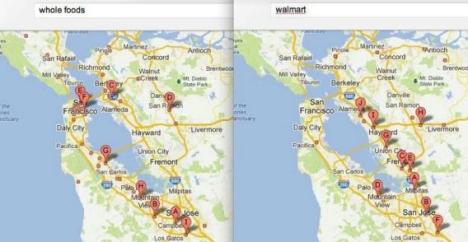 At least one can see who might go into all those Whole Foods to be disoriented by their variety, or speculate on what their disposable incomes are likely to be.  And one wonders at the elite charmed circle that those organic veggies seem destined to feed.

It is a far more focussing experience to focus attentiveness on the eating of sourced foods; food does belong on the plate.  Now, a locally sourced hamburger from Marin farms of the sort sold at Super-Duper is a great  example of “sourcing the previously unsourced,” as it were, and turning back the tide of intentional geographic anonymity.  And who could resist eating beef under a map of the regions of cuts of beef?  What better image for a burger joint that featured grass-fed beef from Marin county?