Strongman on the Border

8.  The mapping of the border has been treated by Trump and his supporters as an endless source of fascination and attention, holding it up to the country in maps in order to display and detail the threats to the image of safety and security he wants to project.  For Trump returned to lament and insist on the danger of the permeability and “fragmentary” nature of the US-Mexico border , in ways that have enabled something akin to a new religion of the nation, in ways that seem to serve his own interests in undermining the authority of the law.  His rhetoric claims the purported novelty and policy shift through a “mandate” to create a border wall, as if this were a break from politics as usual:  he claims to enable a border wall that is “so badly needed” with arrogance that goes beyond the law or existing immigration laws, claiming that he is justified in expanding a barrier of just over 1,000 km–or 650 miles–by the Secure Fence Act of 2006, as if to enshrine it in law, and promised to build a “great wall” to replace the heterogeneous assembly of military materiel, barriers, and fencing.  If the expansion of “intelligent” border protection in the early days of the plans to protect the “homeland” in the George W. Bush administration offered a GIS-enhanced protection of the redrawn border space, and a policing of the virtual space of the border as part of the nation’s security needs, the builder-turned-Presidential candidate Trump–who refused to style himself as a politician–promised the definite construction of a needed border wall.

While Jean Baudrillard had long identified America as the heartland of the simulacrum, the border wall Trump promised, if a simulacrum of safety and security, and national protection, was dramatically presented in ways that stood not as a simulacrum, but affirmed an existential relation to the concept of the southwestern border with urgency for the nation, and created an existential relation to the nation in large part through maps that created the urgency of controlling border flow.  U.S. Border Patrol agents quite plaintively described the limtied protection that they could offer the nation as if to affirm a similarly existential quandary: oo:o“Once they [the migrants] enter the country, even if we [border patrol agents] are standing at the border with our hands out saying, ‘Don’t enter, don’t enter,’ all they have to do is cross one foot into the border and we have to take them into custody,” Judd said. “If they ask for asylum or say I fear to go back to my country, then we have to process them under ‘credible fear’ which allows them to be released into our country.”

The claim for the need for a wall that will prevent trans-border transit gained attraction to an electorate who cathected to the “solid” or “real” border wall, a need bolster by gaps mediated in quite incendiary maps alleging border “permeability.”   The gaps in the wall were advanced in order to foreground the limits of the fencing which the Department of Homeland Security and Border Patrol sought to extend by a security apparatus:  the same fencing that was first proposed as practical by Customs and Border Patrol officers in 2009, based on their own subjective judgements, is now rendered “incomplete” in maps that abstract the fences from the territory, and take the gaps of fence as threat to the nation.

The “gaps” that are rendered in current border barriers are heightened in selective maps that omit the natural or structural barriers to passage, and encourage a misguided image of the dangers of cross-border travel without a continuous wall.The image of potential continuity along the border denies the actual topography– 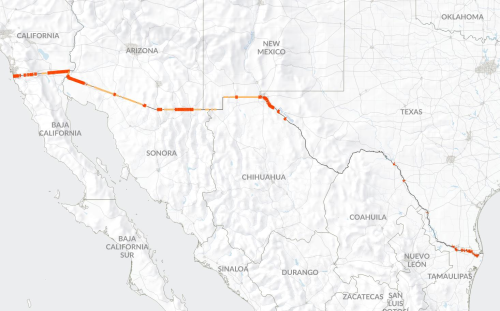 –that is foregrounded in the different varieties of fencing, which helps render the very charges of national vulnerability that Trump’s claims help concretize.

This is of course no where more effectively illustrated than in images of cross-border transit of undocumented immigrants, drugs, and gangs, or border apprehensions, or the evocation of the limits of current border barriers as the responsibility of those who “could not not love our country,” as Trump has argued, and construction of the wall becomes the clearest basis to illustrate the primacy that Trump gives to a language of security and safety and protection of the nation.  The mantra that by making our country “safe again” will “make our country great again” by prioritizing “the security of the American people and our homeland” is an effective hollowing out of the nation. And as a hollowing out of the nation, it focusses on our borders and their gaps–in ways that echoed the longstanding expansion of border fencing parallel to investments in surveillance technologies, increased Border Patrol agents, and the suspension of local laws, beyond the 73 miles of fencing originally built in 2001.

The increased surveillance and monitoring of the border is now framed as showcasing by “restoring law and order to our immigration system” as necessary to the security of the nation.  The use of data maps to suggest the need for the border wall have sought to minimize the negative political consequences, environmental consequences, and cultural consequences of the border wall behind a screen of statistics designed to reveal by showing an alleged drop in crossings of the southern border and of apprehensions of “illegal crossings,” tied to a “spike” in “violent crime,” to create the impression that the toleration of border crossings by other administrations revealed a failure to prioritize the nation.  But the erasure of the rights of individuals within this map–and within all other maps that trace the border–cast such a deep, dark shadow across the conscience of the country–against its consciousness?–by placing the nation and its integrity above the law.  The divide and the division of the nation reinforces a readiness to strip immigrants of rights, and justify stopping immigrants for interrogation, separation from their families, and temporary jailing if not detention.

Trump has heralded his “executive order to establish initial funding for the border wall’s construction” and “following through on his promise to the American people by building a wall on the southern border,” as if it was a turn in American policy and a restoration of the need to meet neglected national needs.  The identification of the border in the accomplishments of his first hundred days, which he has listed beside the enforcement of uniform immigration laws on jurisdictions that are seen as “non-compliant,” by rewriting immigration laws; religion of the nation on which he campaigned to “make American great again” by making our country “safe again” was long tied to the promise to “secure our borders,” in ways that insisted on the exclusive definition of the country–and remove it from its existing laws.  Trump claimed as a candidate “Politicians have failed in their duty to secure our borders and enforce our laws… Let’s fix this problem. Let’s secure our border.”   If Trump identified himself with border authorities and police who claimed to “make our nation safe again,” the border became a showpiece for the existence of clear vulnerabilities.

In an era when immigration laws are poised to be broadly rewritten, and asylum laws stand to be curtailed, we must interrogate the extent to which maps fabricate and perpetuate pronounced vulnerabilities across the southwestern border, to deny the granting of asylum.  The magnifying of the risks of the border and its vulnerabilities for self-serving ends, allowing a rewriting of asylum laws that have been expanded to women in danger of domestic violence, children fearing vendettas from grimes, and eroding a broad reinterpretation of human rights, as if in fear of the expansion of refugees who would arrive from Central America, often on account of the policies that the United States has supported, and the lack of legal infrastructure in those nations.  But the enforcement of the border would be a strong continuity with American policy of earlier years.   The naturalization of the border wall that has permeated Trump’s Presidential rhetoric conceals the timeline of the border barriers that have been suggested in the presidency of George W. Bush– 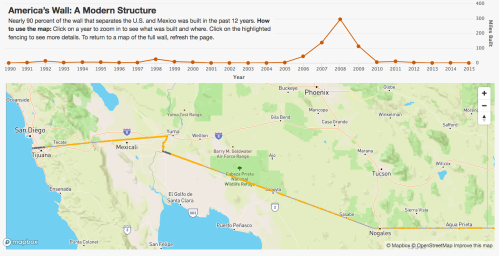 –and its fundamentally foreign nature to the landscape.  At the same time as Trump insists on his lack of conventionality and determination to break from existing policy, a concerted effort has been made to map the border by a fence from Washington, DC, from the second term of the Presidency of George W. Bush, when the first attempt to expand the wall was set on a course for its dramatic expansion.  For the Trump policy of building the wall, far from a novelty, would seem a striking continuation of the growth of border agents in the “sectors” by which management of the southwestern border is defined, and has grown almost continuously since the first construction of border wall near Tijuana.  Trump’s pride in directing attention to “illegal immigration” in his campaign was tied to the necessity of a wall and of building it quickly, without confronting its human costs or erosion of rights.

Joss Fong/VOX, from US Customs and Border Protection, Dept. of Homeland Security

Indeed, the border’s remapping reflects a push for the intense monitoring of the border suggests deep standing interests of Texas anti-immigrant representatives who long promoted the Secure Our Borders First Act, with an eye to expand the networks of roads, physical barriers and  infrastructure around the entire border, in a drive to “wall off” the nation against immigration that stands to violate or overturn established laws of conservation of public lands, wilderness preservation, and wildlife refuges, in a mandate for border protection that would grant the Department of Homeland Security control over lands within a 100-mile zone around the border as necessary to secure the nation, even if neither the Department of Homeland Security nor U.S. Customs and Border Protection asked for such a remapping of public lands and their supervision.  The degree to which this law has directed a revision of policies of the Department of Interior and Department of Agriculture in ways that would fundamentally revise their mission. 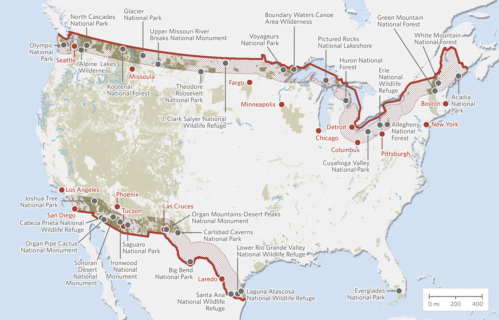