Strongman on the Border

24.  The deep narrative of the border wall may be sold not by Trump, master salesman that he is, who has branded the wall as his own in consummate fashion, but by the maps that have sold the wall as if it were a defense of the nation, without which, as Trump argued, “a nation without borders is not a nation.”  If the tautology is ridiculous, outdated, and obscure, it is repeatedly deployed, from Trump’s misguided injunction of the need to “build a wall, to keep the damn drugs out”–even as most drugs enter the nation through current border-crossing–or to prevent the entry of gang-members who already reside in the United States.  The inflation of the border may reflect Trump’s own poor geographic sense of the threats to the nation, or of the dynamics of drug trafficking and gang violence, but most importantly from a rhetorical facility in placing dangers that face the nation just outside its border, even if the actual numbers of border apprehensions had considerably reduced since the peak years of the 1990s. 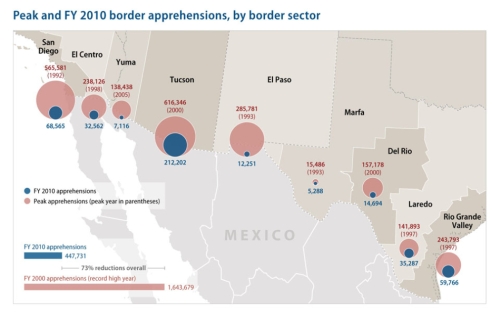 For all the hope of providing a better narrative for the nation in 2008, it’s difficult to acknowledge, although it is increasingly apparent, that the narrative offered by Donald Trump in 2016 has provided to be far more appealing.  Although based on exclusion, rather than inclusion, and the fear of preservation of social and economic integrity, the image of wall-building and the xenophobic ban of dangerous foreigners from entering the country–animated by purposively inhumane metaphors to objectify and demonize immigrants of “anchor babies,” “immigrant hordes” and bad hombres–offered a far more compelling narrative of national identity than was on offer elsewhere.  The narratives of fear and of the need to defend the nation was again incarnated in the “sanctuary cities where you have criminals living,” conjuring a map of danger, yet again, in the hopes to build a stronger and secure border, or to manufacture the desire for one among Americans as a desired in perverse symbol of a receding dream of prosperity, which one pointed across the border as if to show the different socioeconomic lifestyle that we have only managed to keep out of the country by border walls. The image of threats gang-members poised to “break into our country” pose to the nation seems almost existential in proportions, and the image is further intensified by the entry of illegal drugs and–more recently–opioids.  The danger, endlessly evoked in the Trump campaign and the campaign that is currently being waged for the construction of the wall, is designed to create a level of fear and alarm that distracts from actual problems, and offers a panacea to the nation, that does not address real environmental problems, economic inequalities, epidemics of homelessness, or health care:  the recent threat to have federal immigration authorities withdraw  from the “crime nest” that would be the result of a failure to monitor the border.

25.  The Big Brother-like tenor of this sweeping narrative of protection cast the nation as actually under attack, or besieged, was sold to the nation as a matter of urgency, on the urgency of an unseen terrorist attack larger and more consequential than 9/11, and deserving of greater media attention, but undetected and unresolved by the existing government in the same manner that the terrorist attacks of 9/11 failed to be foreseen.  Selling the story of the wall demands considerable improvisation, as it rests on an idea of the nation distinct from all others, chosen by God, and acting as a City on a Hill but a city that needs its barriers to be erected in an age of globalism, when it is suddenly more besieged by enemies of the state than ever before–and besieged by enemies of the working classes that the government has failed to protect or represent.

For the attention to the border wall that Trump has so relentlessly created through his rhetoric has provided a clear part of the spatial imaginary of the southwestern–and southern–border for a large share of the nation, who are convinced of the need to bound an insurmountable wall across the border–even at a cost projected of $15 million per mile, as Army Corps of Engineers records suggest, that is planned to consist of a concrete levee wall atop which bollard fencing runs, whose adjacent lands are monitored both by a buried network of fiber optic motion sensors, and illuminated at night by 20-foot-tall surveillance towers within the 150-foot “enforcement zone” beside the wall to be cleared of vegetation. 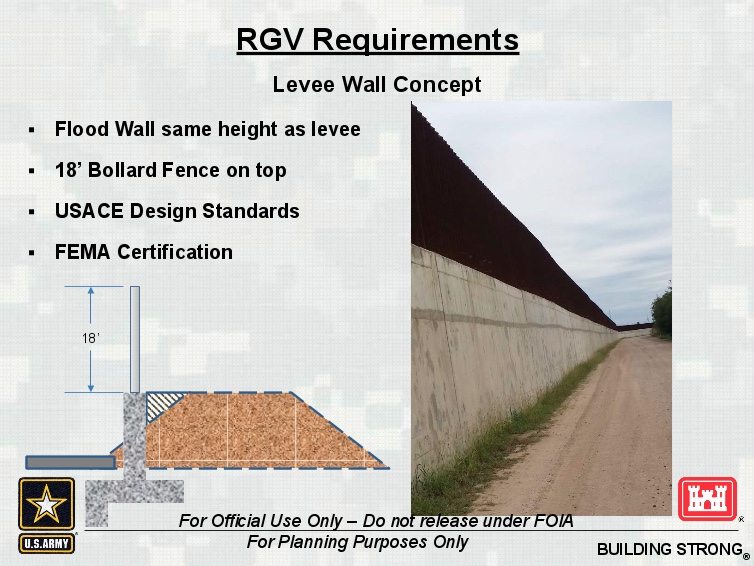 The segments of wall are often traced in the abstract, as if they are needed to bridge existing border structures, whose current “gaps” between existing border barriers, needed to be connected to one another that demanded connecting beyond the six hundred and fifty miles of already completed fencing.  If the “gaps” are usually illustrated against an OSM base-map of road networks  and terrain,– 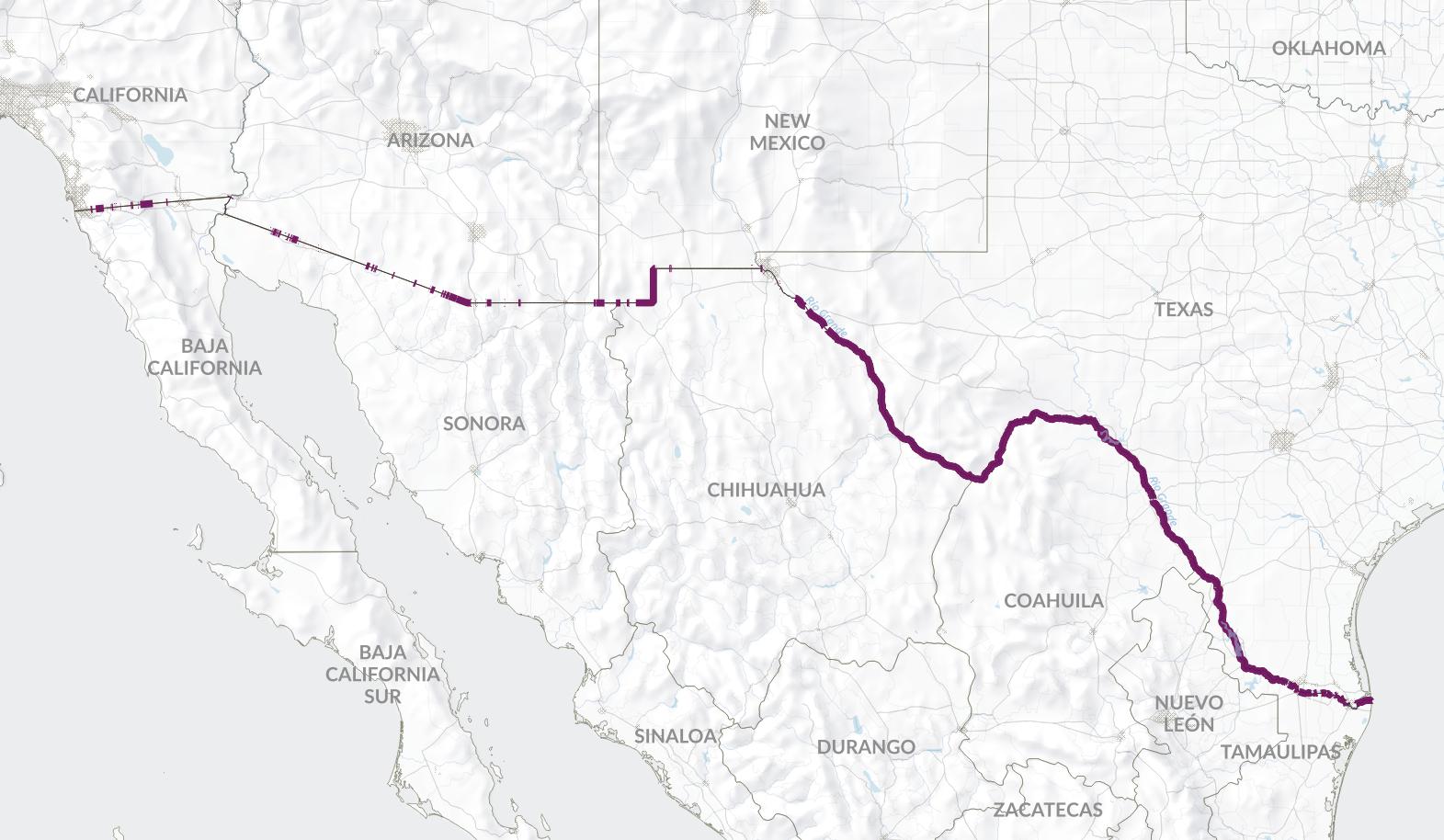 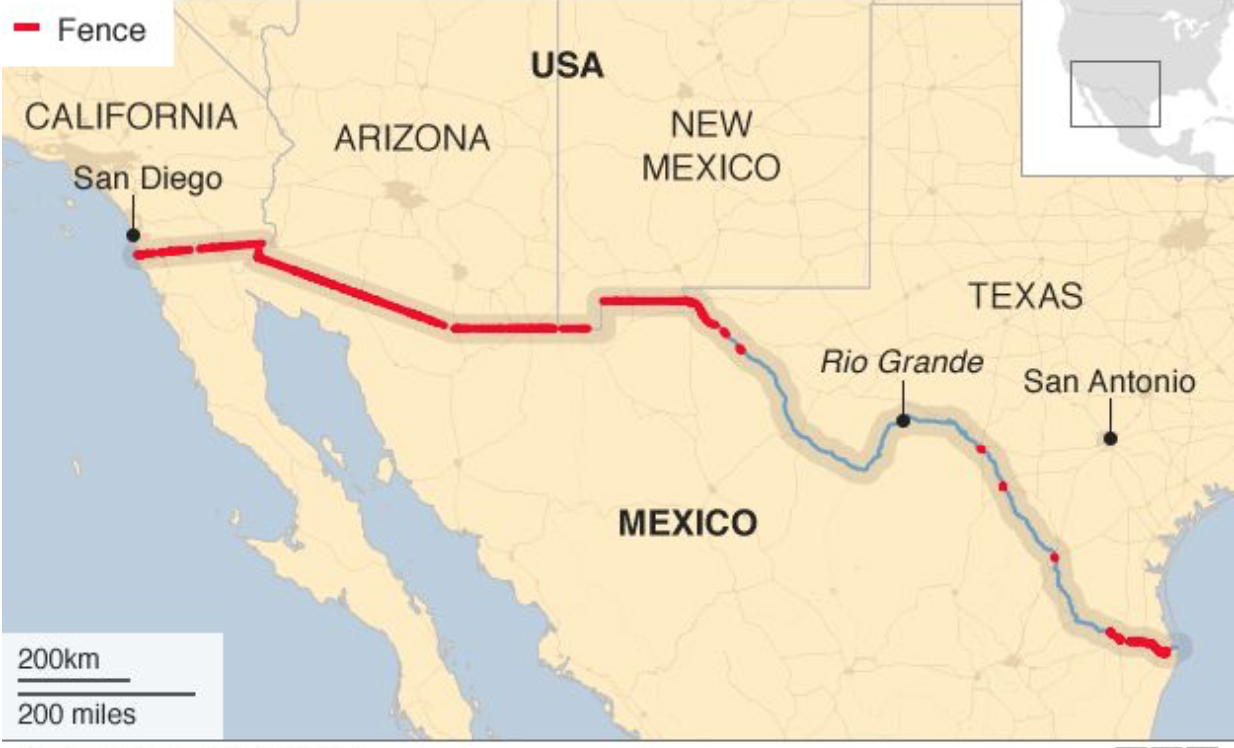 –the image of the “proposed border fence” that stretches across the hundred miles along the southern border with Mexico is often shown rhetorically, minimizing existing sections of fencing and suggesting the need to extend the border barrier. 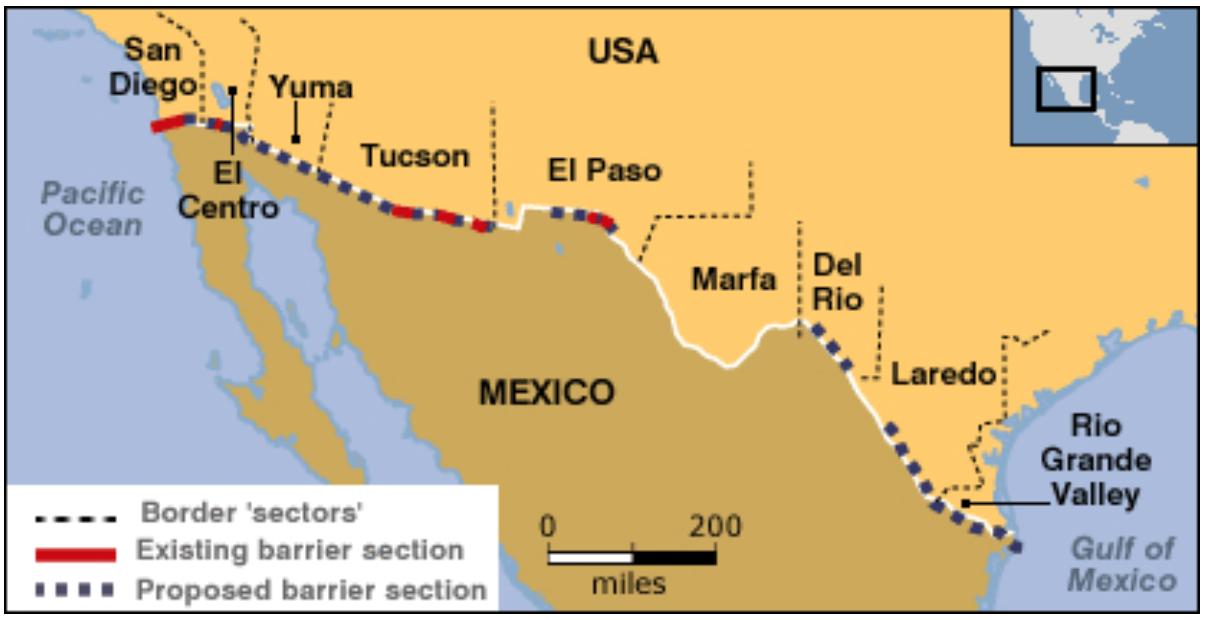 Any such mapping–or imagined construction–of the wall conceals the huge level of difficulty of bridging regions existing without fencing along the southern border, and the reasons that they were not earlier ever built.  The reduction of the border to a “line” and the prominence of the dangers of transborder traversing of territories–clarified here if one reduces scale and examines just one section of the proposed border wall along the Rio Grande Valley, one of the most completed areas of fencing.

Yet across an expanse just thirty-three miles that are planned to be built, a more detailed map of greater scale can reveal the extent of masking of the project’s difficulty erased in the small-scale view that suggests a matter of connecting the dots, as this detail of proposed fencing along the winding waters of the Rio Grande reveals.

Difficulty of construction for fifteen proposed sections of border wall, mapped by Jen Reel, based on U.S. Army Corps of Engineers maps and data, procured by Texas Observer under Freedom of Information Act (2017)