It’s interesting that not long after the fertilizer plant in West, Texas exploded in flames last Wednesday, the scene showed up for many viewers on Google Maps, as a sort of vicarious version of spectatorship:  the map noted sites of interest, while Reddit user OverR created a custom map in which he identified areas that had been evacuated of inhabitants and site of the original natural gas leak blamed for the explosion, noting its epicenter by a bright red pushpin: 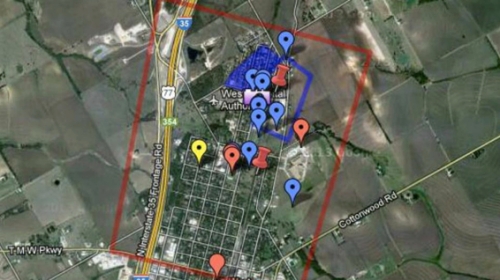 How can a tragedy that created fifteen deaths and many more wounded be mapped?  Why the rush of curiosity to map its occurrence, and debating where the explosion had occurred online:  “I believe the location of the video is actually on the south side of that chainlink-surrounded field,”  noted nelsonblaha.  “The west side, where streetview is available and where you have the video marked, does not have any fence matching that pattern of vertical poles.”

After someone vandalized the map by shifting markers and someone else deleted it from the server, he reposted, attentive to maintaining the map as if for public knowledge.  The phenomenon of mapping the plant and its storage tanks of fertilizer was a way to grapple with the airlifted wounded ferried to hospitals, after local hospitals in West reached capacity.  Beyond a tool of spatial orientation, the map was a way to process an event that was shattering in itself, and the question if residents even knew that the silos stored fertilizer, as they tried to remap the explosion to the sites they knew in their memory: “My mother said she was aware it was a fertilizer storage facility, though my father did not know, assuming grain,” Thalassicus1 noted.  “She was prepared to evacuate us if the place showed signs of danger. Anyone out of eyesight of the could be unaware it existed, especially if new in town. It’s in a somewhat remote corner of town which hopefully limited casualties.”  And then:  “It’s eerie because my brother and I used to play just a few dozen paces away from the blast site, literally across the street in the playground you can see on google maps.”

The map only started to orient viewers to the still unexplained tragedy of the explosion that occurred twenty miles north of Waco just before 9:00 p.m. Eastern Time, or during dinnertime in West, immediately wounding 160.  The icon for the explosion was a group of leaping flames: 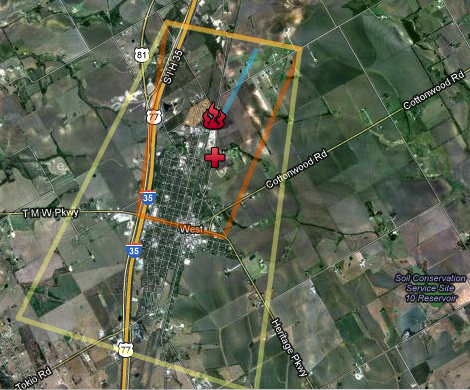 We have heard many times over the past few years how fertilizer and ammonium nitrate plays a crucial role in home-made bombs.  It’s perhaps a surprise that since 1921 there are only records of some 17 accidental explosions at a fertilizer plant, and only four disastrous explosions of ammonium nitrate accidents caused over 100 deaths.  The  explosion in West, Texas is more confusing since the majority of these accidents occurred some time ago–just over sixty-six years ago, a ship containing fertilizer exploded at the port of the Texas City, a blast of some 2300 tons of ammonium killing 581; a 1921 explosion of a BASF plant in Oppau, Germany killed 561; the 1951 explosion of a plant of fertilizer in Belgium claimed 189 lives.  In 1924 in Nixon, NJ, an explosion killed 18 at the Nixon Nitration Works, and trucks of ammonium nitrate exploded in 1959 in Oregon (killing 14) and Kansas City in 1968 (killing 23); 1994 saw a huge explosion in Port Neal at a plant of some 5700 tons of ammonium that left 4 dead.  The Canadian Press has created the following interactive map of other ammonium nitrate explosions since 1921.

The current explosion killed 15, ten of whom were first responders and firemen, as well as destroying a nursing home, middle school, and some sixty-five homes.  It raises questions about how progressive deregulation of industry and attacks on the EPA encouraged–if unwittingly–the lack of oversight given that no monitors been present at the facility for some six years.  There were not any sprinklers in this facility, as well as no containing walls for the eventuality of fire:  nor did they report the 270 tons of ammonium nitrate stored in the facility.  We might start to map the effects of deregulation on such accidents, if the space was not already destroyed.

What makes a fertilizer plant explode?  Lack of regulations would be a good place to start to look.  As a reminder of how present the presence of the fertilizer industry is in our country alone, and how many are nitrogen-based (noted by red points), creating the highly flammable ammonium nitrate: 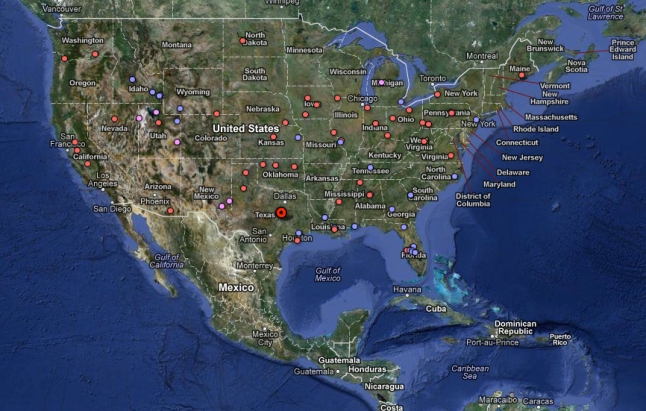 It is striking that there is at least one per state; one disaster waiting to happen and to be seen on the map, and not hidden in the landscape.  Only if an explosion again happens will the sites of tragedy be mapped in greater detail.